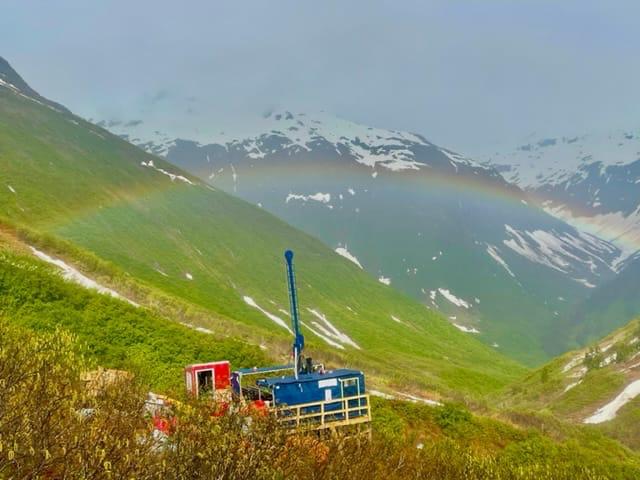 Goliath Resources (TSXV: GOT; FRA: B4IF) is planning to drill 24,000 meters this season, using four drill rigs simultaneously. In doing so, geologists aim to extend the continuity of the southwest-dipping Surebet Zone mineralized horizon at the Golddigger project in British Columbia's Golden Triangle to a projected area of 1.3 by 2.2 kilometers. Sixteen new drill sites alone are planned along the Surebet discovery. They will include, to the southwest, the Real Deal and Cloud 9 structures

However, Goliath kicked off the season with the bold step-out drill hole on "Pad J" on the adjacent "New Extension Target" about one and a half kilometers from Surebet. Pad J is located at the extreme eastern edge of this year's drilling campaign. It is all the more remarkable that the first drill hole of 2022 (GD-22-25) has already intersected five wide intervals of disseminated and vein/breccia-bearing sulphide mineralization near surface in the New Extension Target. Over a length of 95.5 meters, pyrrhotite, pyrite and chalcopyrite were encountered in the known Hazelton volcanics. Assay results are pending. 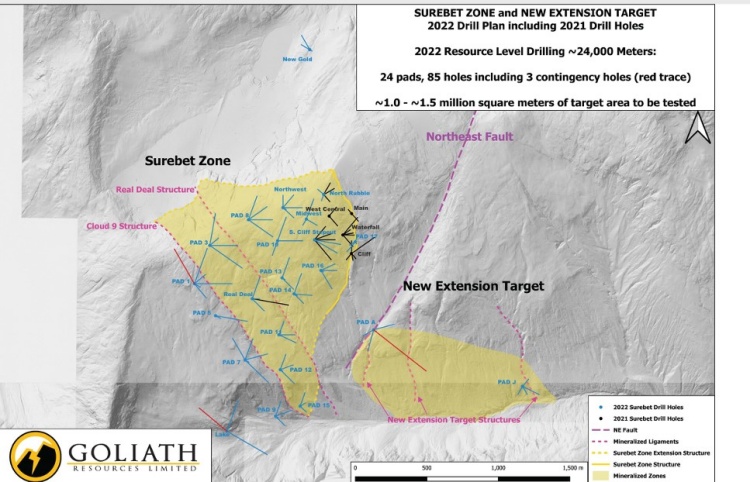 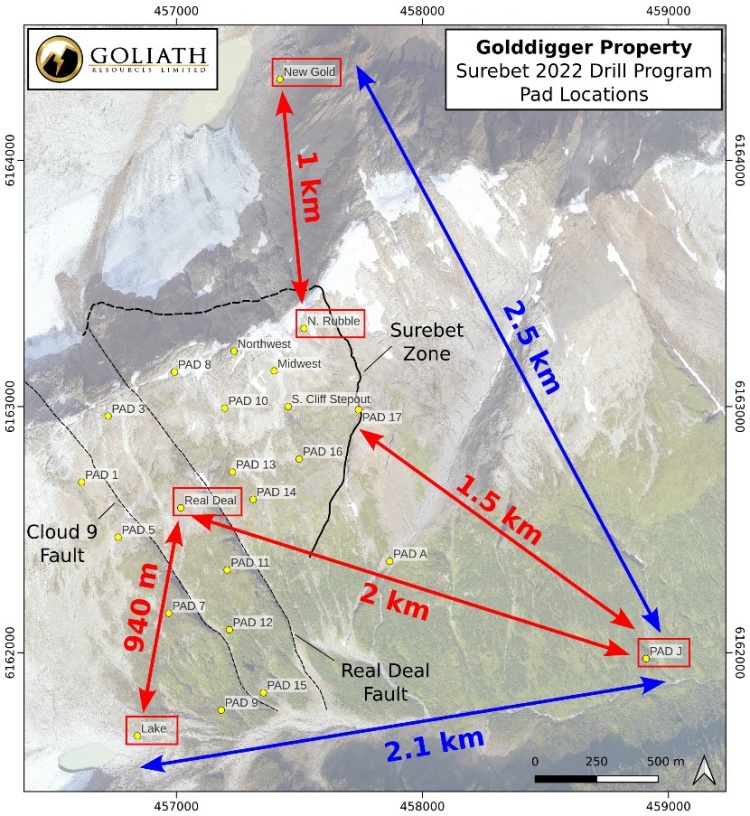 Figure 2: Drilling this season is focused on the Surebet Zone to the west, but with the "Lake" step-out drill holes to the southwest, "Pad J" to the east, and "New Gold" to the north, exploration extends well beyond the Surebet Zone. In total, the exploration window increases to 5.25 km².

Roger Rosmus, Founder and CEO of Goliath Resources, stated, "We are at the beginning of an exciting 2022 drilling season and the initial results from the opening hole with multiple wide intercepts of mineralization have far exceeded our expectations. The mineralization confirmed in the opening hole at the New Extension target strongly suggests the presence of a large mineralized system at depth on the Golddigger property. The planned 24,000-meter drill program will test areas east, north and west of the known mineralization over an area of 5.25 square kilometers and will allow us to better understand the relationship between Surebet, the New Extension target and New Gold."

Summary: Goliath Resources has two different bets running this season with different stakes: The first major bet is that the structurally-bound mineralized horizon of the known Surebet discovery continues in a southwesterly direction. 16 new drill pads are expected to follow mineralization over an area of nearly 3 km². Given the successful "Real Deal" step-out drilling that proved the continuity of the Surebet zone last year almost a kilometer from the drill pads in the northeast corner of Surebet, this year's drilling is more in the nature of expansion drilling than pure exploration drilling. The planned step-out drill holes for this year are Goliath's second bet. With comparatively small stakes, they could succeed in again doubling the already growing footprint of mineralization at Surebet. Investors, of course, would like to see both bets come to fruition. The first would finally establish Surebet as a real player in a league with, say, Skeena Resources (TSX: SKE). The other bet fires the imagination. For a gold explorer, there's nothing better. One can only agree with CEO Roger Rosmus: "Goliath Resources is poised to be the next big high-grade gold-silver discovery in British Columbia's Golden Triangle." We'll stay tuned.