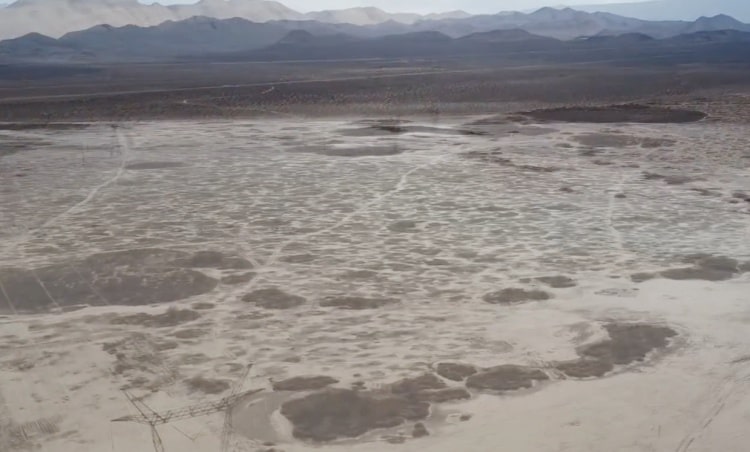 Usha Resources Ltd.'s (TSXV: USHA; OTCQB: USHAF; FWB: JO0) technical team has arrived at the company's Jackpot Lake lithium brine project near Las Vegas, Nevada, and has begun preparations for the first six exploration drill holes. Currently, Harris Exploration, the company contracted to drill the holes, is constructing a short access road to lay out the drill pads. The drill rig is expected to arrive shortly. Usha has permits for 2,700 meters of drilling in six holes and intends to define a NI 43-101 compliant resource.

The Lithium Salar jackpot is approximately 11.3 km2 in size and is located only a four-hour drive from Albemarle's lithium mine, Silver Peak, in the United States. Silver Peak is currently the only producing lithium mine in the USA. The salar there is about twice the size of Jackpot Lake and has been producing continuously since the mid-1960s.

Deepak Varshney, CEO of Usha Resources, commented, "We are very pleased that the workers are now on site and look forward to the start of drilling. Usha has a corporate objective to become a leading North American lithium producer. The Jackpot Lake project is, in our opinion, part of what we need in North America to secure a domestic lithium supply."

The Jackpot Lake lithium brine concession area is located in Clark County, 35 kilometers northeast of Las Vegas, Nevada, and consists of 140 mineral concessions totaling 2,800 acres (approximately 11.3 km2). The geological model is similar to that of Albemarle's Silver Peak Mine in Nevada.

The presence of a highly concentrated brine in Jackpot Lake is well documented by a variety of preliminary work. The U.S. Government Geological Survey, USGS, has analyzed 129 drill core samples with an average lithium grade of 175 ppm and a maximum grade of 550 ppm. The current average grade for Albemarle's project is approximately 121 ppm.

Gravity surveys have identified a closed basin where brines remain in the basin without dilution from external water sources. Geophysical modeling based on gravity and Controlled-Source Audio-Frequency Magnetotellurics/Magnetotellurics (CSAMT/MT) surveys provided evidence of highly concentrated brines located relatively close to the surface. The results of the CSAMT survey at the Jackpot Lake project revealed a large, continuous ore body with a very low resistivity throughout the permit area, particularly above bedrock depths of 625 meters, indicating highly concentrated brines.

Summary: Geologically, the Jackpot Lake Salar is the little brother of the Silver Peak Salar, where Albemarle has been producing lithium for more than 50 years. The upcoming drilling is perfectly prepared. Data indicate a closed basin with an underground lithium lake above bedrock at a depth of about 625 meters. Recently, the internationally sought-after lithium expert Mike Rosko was personally on site. He will manage the resource estimate for Usha despite his multiple commitments in South America. Theoretically, just two drill holes would be enough to define a first so-called "inferred resource". However, Usha wants to drill at least six holes to a.) gain more certainty and b.) maximize the resource if possible. The value of a lithium resource in the U.S. is likely to increase even further as a result of the Biden Inflation Reduction Act. Usha's current stock market value does not currently reflect this fantasy. The current enterprise value of less than CAD 5 million (7.3 million market value less 3 million cash) says more about the current liquidity squeeze of stock market investors than it does about the value of the project itself. At the latest with the announcement of a resource, the market will no longer pass Usha by. After all, neighbor Acme Lithium (TSXV: ACME) has nearly CAD 30 million in market value after successful drilling. A clay-rock based lithium project like Cypress Development's in Nevada even brings it to more than a hundred million dollars in valuation. Whether this is rational remains to be seen. In any case, there is still a lot of room for Usha to go up if drilling is successful.