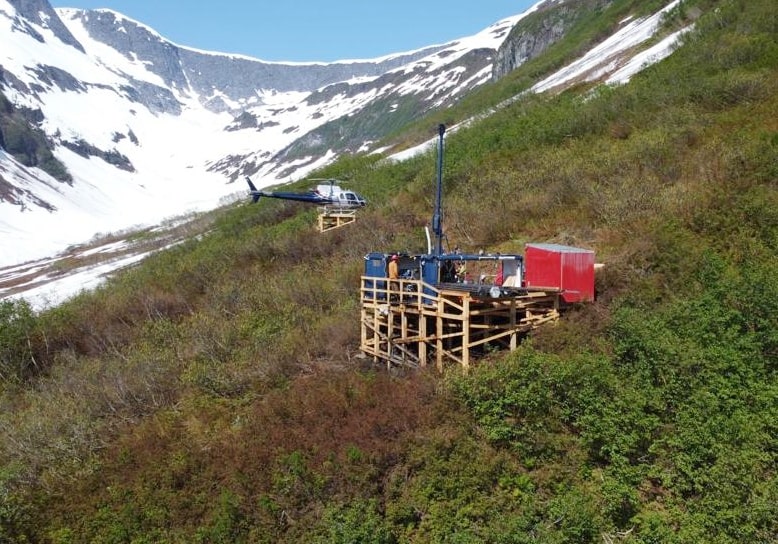 Goliath Resources Limited (TSX-V: GOT; OTCQB: GOTRF; FRA: B4IF) announces a dream start to the current drilling season at its Golddigger project at the south end of the Golden Triangle in British Columbia. The first three holes of the season on step-out drill pad J in the "New Extension" area on the southeastern edge of the 5.25 km² exploration window (see Figure 1) have intersected significant intervals of sulphide mineralization of up to 135 m. All three drill holes were hits. Laboratory results are pending.

The new drilling is part of the 24,000 meter drilling campaign this year. A further three drill rigs will be deployed in the coming weeks. Last year, Goliath drilled approximately 5,300 meters in 24 holes, 100% of which intersected mineralization. In total, Goliath plans to drill 84 holes from 24 different drill pads in 2022.

The newly discovered intercepts in the first three holes confirm the presence of an extensive mineralized system at depth and high potential for linear, widespread mineralized bodies open in all directions. The style of mineralization observed in the New Extension target in the underlying volcanic rocks is similar to that observed in the drill holes and at surface in the Surebet zone. Surebet is higher in the overlying sediments, strongly suggesting that it is the same extensive subsurface source of mineralizing fluids.

Drill holes number 25 through 27: The first three holes of the 2022 season

The extensive mineralized system has been confirmed over a length of 1 km north-south along the Surebet Zone and over a length of 2 km east-west from Real Deal to the newly drilled Pad J in the New Extension target area, which remains open in all directions; see map below. 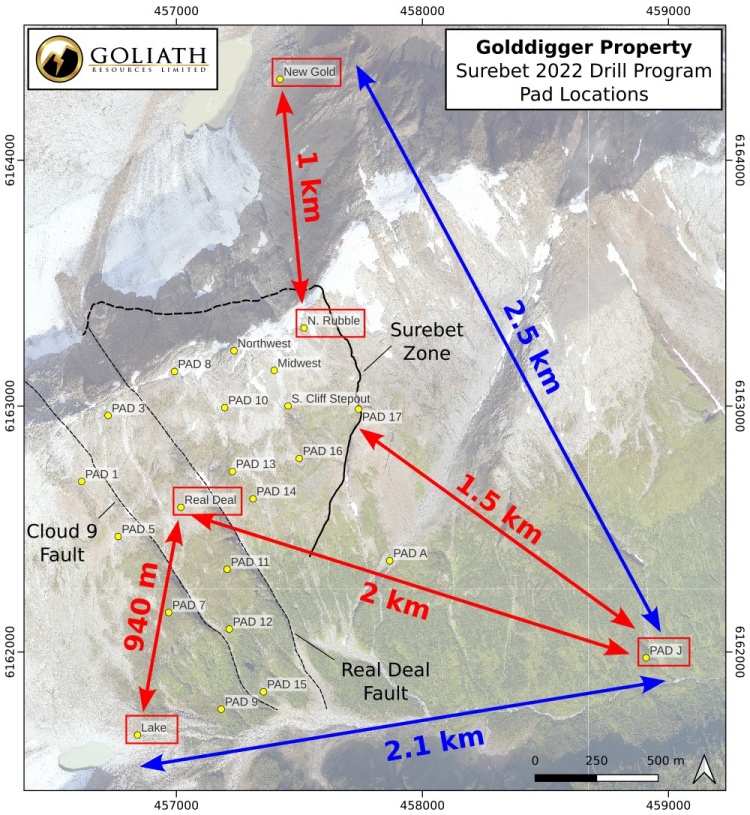 Figure 1: There are 2 kilometers between the Real Deal well and Pad J. Next, Goliath plans to drill on Pad 15, which is about 820 meters south of Real Deal and approximately a stepout of ~1,800 meters from the most northeastern Surebet samples. The drill rig has already been mobilized. A second drill rig will soon test "New Gold" in the far north of the exploration window.

The drill rig from Pad J will be moved to Pad 15, 1.6 km west (820 m south of Real Deal), to target the Surebet system at depth, while a second drill rig will test the extension of the system in the Hazelton volcanic rocks to the north at New Gold, 2.5 km north of Pad J (1 km north of North Rubble); see map above.

The 24,000 metre drill program planned for this year is expected to extend the 2021 extension of known mineralization in all directions, including westward (to Lake Pad, 940 m SW of Real Deal), northward (to New Gold, 1 km north of North Rubble) and eastward (to Pad J within the New Extension target area, 1.5 km southeast of Surebet, covering an area of 5.25 km². Outcrop, where initial drilling has confirmed several broad zones of mineralization); see map above.

The 2022 drill program will focus on expanding the known parameters of the high-grade Surebet gold-silver discovery. Plans call for 24,000 m of drilling in 84 holes from 24 drill pads using 4 drill rigs. It is designed for resource-level infill drilling and outlines the large mineralized system over an area of 2.1 km east-west and 2.5 km north-south (5.25 square kilometers).

The Golddigger property is 100% controlled and covers an area of 23,859 hectares (59,646 acres or 239 square kilometers). It is located in the world-class geological setting of the Eskay Rift within the Golden Triangle of British Columbia and is only 2 km from the 'Red Line' which hosts several world-class deposits. The property is located 30 kilometers southeast of Stewart, British Columbia on tidewater.

LiDAR imagery, drone imagery and field observations have identified several additional parallel structures within a 4 square kilometer area. Geochemical analysis has confirmed high-grade polymetallic gold-silver mineralization within these structures. The steeply dipping Real Deal and Cloud 9 structures and the extensional zone extensions have similar mineralization, geochemistry and texture to the Surebet zone. Geological observations at surface and in drill core indicate that the structural stress in the Surebet Zone is concentrated along its shallower dipping geometry. Real Deal and Cloud 9 are believed to be en-echelon structures that join Surebet at depth. The Surebet mineralized zone remains open in all directions.

Summary: Goliath Resources has its work cut out for it this season. Managing 84 holes from 24 different drill pads is no easy feat. Due to the weather, the team is working its way up from the valley floor to greater heights. This is another reason why Pad J was selected at the beginning of the season. All the more encouraging are initial observations suggesting that the mineralization on Pad J may be related to the mineralization of the known Surebet Zone. There is much to suggest that Goliath has discovered the feeder system in the volcanic rocks that is the source of mineralization in the higher sedimentary rocks of the Surebet Zone. Further drilling - particularly on the strategically located Pad 15 - will test this hypothesis shortly. Goliath's project is growing at a rapid pace in all directions. The relative strength of the stock shows that investors appreciate this.