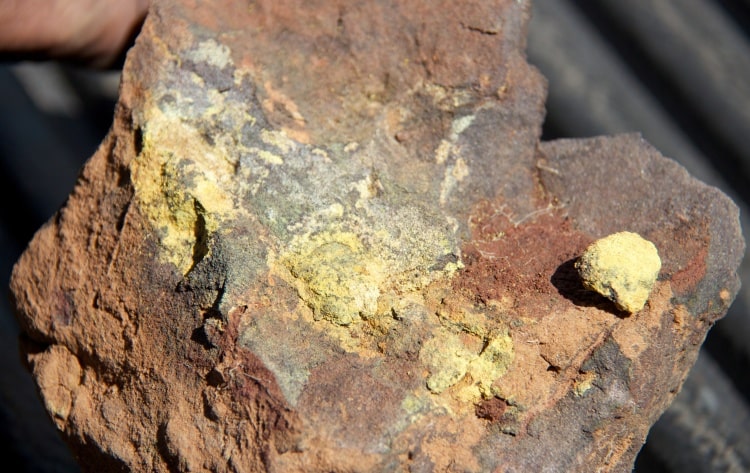 Searchlight received approval for surface exploration at Kulyk Lake on June 13 and has already commenced field work on June 21. Searchlight plans to grid sample a previously unknown uranium zone and a 3 km long thorium/rare earth zone to the north.

Stephen Wallace, CEO stated, "The focus of this exploration phase will be to explore two excellent large radiometric targets, one with thorium and one with uranium."

Thorium is considered a signpost for rare earths in the mineral monazite, the main mineral in the known Kulyk Lake rare earth deposit. The highest thorium value from the 2021 radiometric survey was over the known Kulyk Lake REE trenches (Map 2), which had historical rare earth oxide values of 56.18%. In addition, the radiometric survey identified the Kulyk Lake target as part of a larger anomalous thorium zone up to 6 kilometers in length. The initial exploration plan is to explore the southern half of the zone west of Kulyk Lake.

Uranium results from the 2021 radiometric survey identified a significant previously unknown uranium target (Map 3) as well as known uranium occurrences, including the Eldorado occurrence with historical assays of 0.785% U3O8. The newly identified anomalous uranium zone had several high values, including the highest uranium value in this survey. The June 2022 exploration plan calls for initial exploration of the high grade cluster in this area, followed by a scanning scintillometer survey and rock sampling.

The 37 Kulyk Lake claims were all acquired by staking and are 100% owned by Searchlight Resources with no royalties. The claims cover an area of 346.7 square kilometers.

Bottom line: it's show-me-time at Searchlight. The sensational uranium and REE discoveries at Kulyk Lake were made nearly nine months ago. Only now can geologists take samples on site and answer the burning question: Can the high readings for uranium and rare earths be confirmed on the ground? In a few weeks, we'll know whether it's worth testing these targets through drill holes. Unfortunately, this will again take time, but the rewards could be all the greater if successful. What if Searchlight succeeds in making the next big uranium discovery in Saskatchewan after Fission Energy and Nexgen? We certainly don't want to miss out on that. We'll stay tuned to Searchlight.

How Searchlight could rewrite the textbo... From everyday life, everyone knows that you only find what you know. This experience can be illustrated parti... 867 views Mon, 18 Jul 2022, 03:17:38