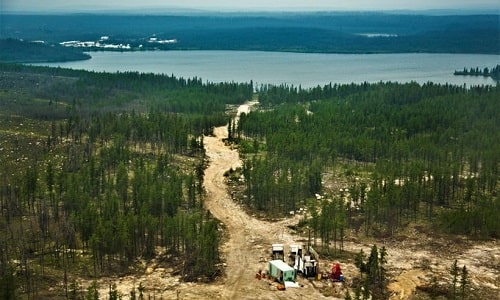 In its first ground survey at the Kulyk Lake rare earth element project in Saskatchewan, Searchlight Resources Inc. (TSXV: SCLT; US: CNYCF, FRA:2CC2) has confirmed high to very high radioactivity in 80 scintillometer readings. This was the first ground verification of values obtained during airborne geophysical measurements in 2021. However, a chemical analysis of the grab samples is still pending, so the exact source of the radioactivity is still unclear. Possible sources include uranium, thorium or potassium. However, some of the measured values are extremely high!

A field scintillometer used by the geologists provided 30 readings ranging from 1,000 to 13,800 counts per second ("cps"). Values of 1,000 cps are considered promising in the industry. Values of 10,000 cps indicate exceptionally high radioactivity. By comparison, Fission Uranium reported in September 2021 that it had intersected a 50-meter section of drilling with over 10,000 counts per second of radioactivity. In early 2022, Fission Uranium reported chemical sampling 46 meters of 8% U3O8 from the same zone. Kulyk Lake is located approximately 165 km north of La Ronge, Saskatchewan, and 65 km south of the Key Lake uranium mine.

The on-site surveys were aimed at following up on thorium anomalies identified during the 2021 airborne radiometric survey. Searchlight uses thorium as a signpost element to trace the rare earth mineral monazite documented in the Kulyk Lake area. The exploration program revealed an extension of the known pegmatite vein swarm identified in previous work. These pegmatites occur within the Rare Earth Prospecting Zone.

The field program was conducted by Axiom Exploration Group Ltd (Axiom) and covered approximately 25% of the 6 km thorium anomalous zone discovered during the 2021 airborne survey. A total of 18 grab samples and 80 scintillometer measurements were taken. The scintillometer measurements included 30 readings with more than 1,000 counts per second (cps), with values of up to 13,800 cps associated with newly mapped pegmatites on the north side of Kulyk Lake.

Stephen Wallace, CEO of Searchlight said, "We are encouraged by the strong radioactivity detected in a large area on the north side of Kulyk Lake and will be conducting further detailed surveys in this newly identified prospective area."

The Kulyk Lake project covers 349 square kilometers and is located approximately 65 km south of the Key Lake uranium mine. Searchlight Resources originally staked the claims based on the Fanta occurrence, a historically known occurrence of massive monazite on the south shore of Kulyk Lake.

Scientific studies by Watkinson and Mainwaring in 1975 and McKeough et al. in 2013 documented the composition of the Fanta Zone monazite-bearing pegmatite and postulated a genetic model for its formation. The first article documented that the monazite has a constant composition with REE content of lanthanum oxide 15.1%, cerium oxide 36.1%, praseodymium oxide 4.9%, neodymium oxide 10.1%, thorium oxide 4.3%, and phosphorus oxide 27.8%.

Mineral exploration was previously conducted between 2009 and 2011, primarily on the south shore of Kulyk Lake. The Fanta trench samples were described as follows: "Three heavy, radioactive, brick red and black samples were collected from these trenches. All three samples (AGKJR 001 through 003) yielded exceptional total rare earth oxide contents of 55.9%, 30.6%, and 18.9%, respectively. This is a factor of 10 higher than any rare earth element results we have ever seen in the area and approaches the theoretical maximum rare earth element content of the mineral monazite. Sample AGKJR003 is a 0.7 m long chip sample. The individual rare earth element contents of grab sample AGKJR001 are as follows: Cerium oxide - 28.1%, Neodymium oxide - 9.57%, Europium oxide - 0.086% and Terbium oxide - 0.051

Pegmatites are an exceptionally coarse-grained igneous rock with interlocking crystals that commonly occur as irregular dikes, lenses, or veins, especially at the margins of batholiths. Most grains are 1 cm or more in diameter. Although pegmatites have a similar gross composition to other rock types, their composition is generally that of granite; the composition may be simple or complex and contain rare minerals rich in elements such as lithium, beryllium, cesium, boron, fluorine, niobium, tantalum, uranium, and rare earths. Pegmatites are the last and most hydrous part of a magma to crystallize, and therefore contain high concentrations of minerals that are present only in trace amounts in granitic rocks.

Monazite is the most important rare earth ore mineral in the world and contains the element thorium, which Searchlight uses as a pathfinder element. Thorium is radioactive and can be detected by radiation measurements from the air and on the ground.

To advance rare earth production, the Government of Saskatchewan, through the Saskatchewan Research Council, has funded a $30 million monazite processing plant in Saskatoon to extract rare earths from monazite concentrates. Kulyk Lake is one of only two high-grade monazite deposits known to exist in the province.

Conclusion: It will probably take a while for the market to digest today's news from Searchlight, especially since the decisive chemical analyses are still pending. Nevertheless, one can already begin to add up 1 and 1. About 10 years ago extremely high rare earth values were measured in the northern part of Kulyk Lake, some of them approaching the theoretical maximum. These values were the reason Searchlight secured the area through staking. Last year, the thorium anomaly was confirmed from the air. Thorium is considered a pathfinder for monazite, which in turn is the host rock for rare earths. Now the first ground subsurface surveys have reconfirmed the historical data and immediately extended it. Apparently, the potentially interesting pegmatite swarms on the project extend for 6 kilometers. Only about 25% has now been sampled. So Searchlight is only at the very beginning. Not to mention that readings from the potential uranium discovery further south are still pending. Searchlight could be at the beginning of a significant discovery. The more data the company delivers, the easier it will be for investors to wrap their heads around the company. For now, one can only speculate. Is this a superlative discovery? What is the likelihood of high rare earths? For us, that's exactly what makes new discoveries so appealing. We will stay tuned to the Searchlight story.