A total of 49 grab samples were collected and 84 scintillometer readings were taken. The scintillometer readings included 47 values over 1,000 counts per second (cps) with values up to 13,000 cps. The grab samples will be forwarded to the Saskatchewan Research Council laboratory in Saskatoon for full analysis. As recently as Monday, Searchlight reported high radiometric readings from its North Kulyk Lake rare earth exploration target located a few kilometers to the north. Kulyk Lake is located approximately 165 km north of La Ronge, Saskatchewan, and 65 km south of the Key Lake uranium mine.

The field program of only three days on South Kulyk Lake, which had never been visited by geologists before, located a zone of strong surface radioactivity within newly mapped pegmatites on a rock ridge southwest of Kulyk Lake. This particularly radioactive zone extends at least 150 by 50 meters, estimated Searchlight CEO Stephen Wallace. Wallace called it an "excellent result." 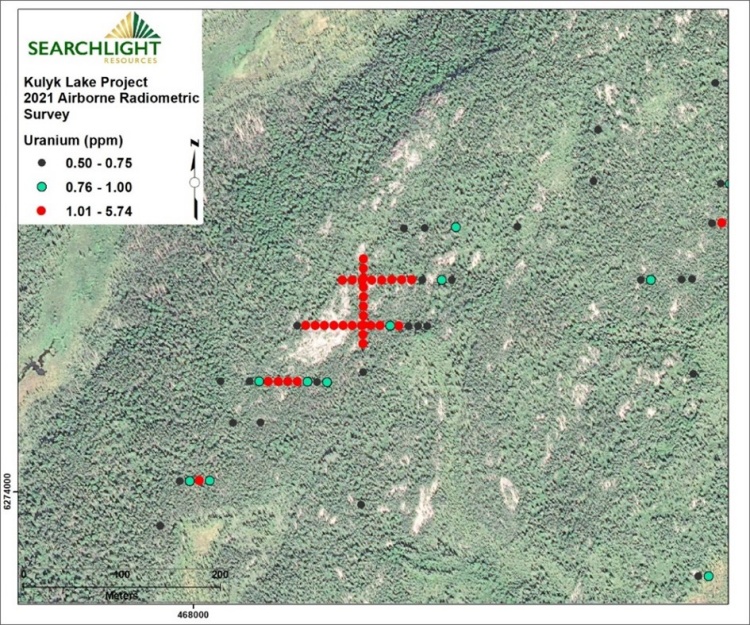 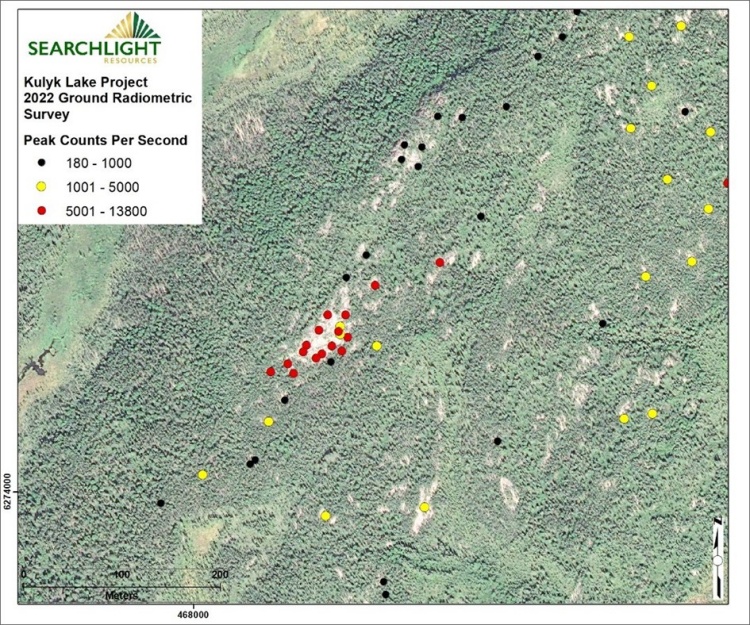 The total Kulyk Lake project covers 349 square kilometers of 100% staked claims located approximately 165 km north of La Ronge, Saskatchewan and 65 km south of the Key Lake uranium mine. Searchlight Resources originally staked the claims based on the Fanta occurrence, a historically known occurrence of massive monazite, and the Eldorado uranium occurrence on the south shore of Kulyk Lake.

Mineral exploration has already been conducted between 2009 and 2011, primarily on the south shore of Kulyk Lake. This area, including the Eldorado uranium zone and the Fanta rare earth zone and immediate surroundings, was systematically mapped and trenched. Results included 0.785% U3O8 over 1.1 m from sample DFKJR040 in the Eldorado occurrence and 0.793% U3O8 in a sample near the Yellow Brick Road occurrence, named for the yellow uranium staining at surface.

In September 2021, Searchlight Resources completed an airborne radiometric survey that delineated significant new thorium and uranium targets. It was not until this summer season that geologists were able to verify the readings on the ground for the first time.

Bottom line: At what point can a discovery be called a discovery? The initial impetus certainly came from the high readings from the airborne measurements last fall. While these measurements were made by an experienced team that had also been involved in the discovery of Fission Uranium's Patterson Lake project, the airborne readings left many questions unanswered. One of them was whether the readings - similar to Fission's at the time - could be loose debris that had been moved to its current location by glaciers. Searchlight can already answer this question in the negative. The radioactivity occurs in the local rock ridge in the pegmatite that is expected there. Right off the bat, the team has identified a sizable area, 150 meters by 50 meters, where the radioactive rock is coming to the surface. This could prove to be a huge advantage in further exploration, as both Patterson Lake (Fission Uranium) and Nexgen Energy's famous Arrow deposit lie beneath a cap layer and do not come to the surface directly. It is still "early days," as they say in English. Above all, we must now wait for the chemical analysis of the grab samples. Drilling results will probably not be available until the end of the year. Nevertheless, the elite uranium community in the Athabasca Basin, which includes only a handful of companies, will sooner or later have no choice but to accept Searchlight Resources as a new club member. This should be reflected in Searchlight's valuation, as Searchlight does not yet belong to any club, neither that of the uranium companies nor that of the REE companies.