Through three targeted diamond drill holes totaling 601 length, Searchlight Resources Inc. (TSXV: SCLT; FRA: 2CC2) has confirmed near-surface gold potential around the historic Henning-Maloney Mine in Saskatchewan, gathering for the first time valuable geological structural information in extension of historic mining from the 1940s. Henning-Maloney is one of a total of four historic gold mines located approximately 10 kilometers south of the Flin Flon mining center that Searchlight has combined to form the Bootleg Lake Project.

Searchlight is the first company to explore the geological context between these projects, which are only a few kilometers apart. In particular, recent drilling at Henning-Maloney is providing valuable information on the Rio fault system underlying the mines within the Bootleg claims.

The deepest gold intersection was 140 meters vertically below surface, which is approximately three times the depth of the 1940s mine shaft.

CEO Stephen Wallace expressed his satisfaction with the results, "We are very pleased with our initial drilling at Henning-Maloney, both confirming the location of gold mineralization and tripling the depth of known mineralization." According to Wallace, the results open up future drill targets. Corresponding plans for further drilling are already underway.

Figure 1: Overview of the four historic gold mines that together define the Bootleg Lake project. Searchlight aims to show that the projects, located only a few kilometers apart, form a larger geological context.

Geological similarities between Henning-Maloney and Rio Mine

Both Henning-Maloney and Rio Mine share the commonality of being located near or at the intersections between the Rio Fault and a north/south trending structure. Both mines are also associated with structurally complex zones defined by structural analysis. These criteria identify several other drill targets within a two-kilometer radius of Henning-Maloney. These include the historic Wekach gold mine, located two kilometers west along the Rio Fault. 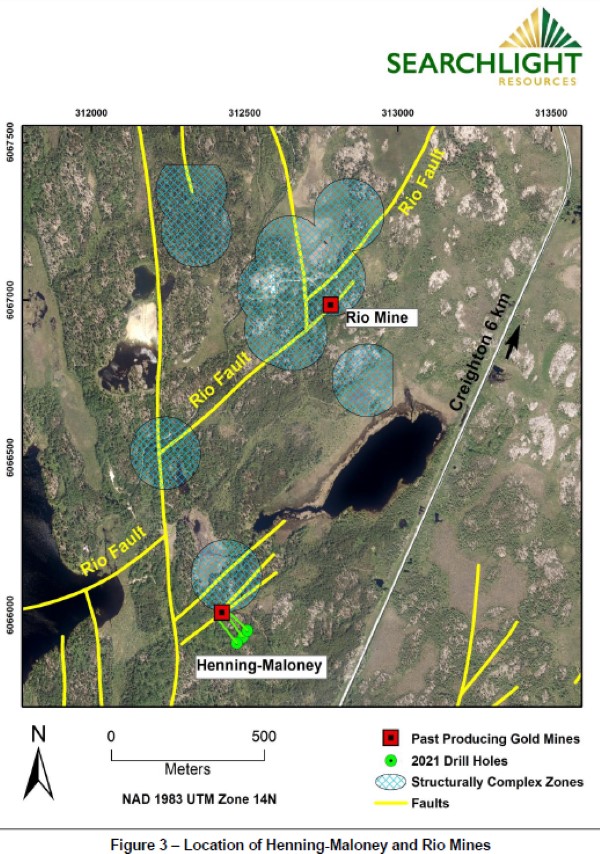 CONCLUSION: The recent drilling successes at Henning-Maloney may not seem spectacular in themselves, despite the high grades in some cases. Crucially, they support Searchlight's larger hypothesis, that at least three of the four historic mines on the Bootleg Lake project are geologically related. A key feature appear to be the intersections between the Rio fault and a north/south trending structure. This pattern could provide the key to further successful drilling and vastly increase the footprint of the Bootleg Lake Project in the future.

Conico profits from the spectacular PGE ... Anyone who has doubted whether discoveries will still be rewarded by the market in view of weak stock mark... 256 views Mon, 16 May 2022, 12:49:37

Lithium explorer Portofino Resources exp... After an extended period of behind the scenes activity, but limited news, the signs are green for lithium expl... 89 views Tue, 10 May 2022, 15:39:48