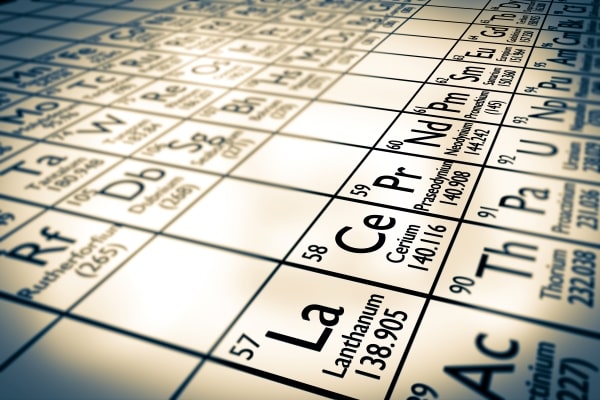 Searchlight Resources Inc (TSXV: SCLT; FRA: 2CC2) has contracted the Saskatchewan Research Council ("SRC") laboratory in Saskatoon to conduct metallurgical testing for optimal recovery of rare earth elements from a high-grade 20 kilogram monazite sample from Searchlight's Fanta zone near Kulyk Lake, Saskatchewan. The SRC will provide the results in the form of a rare earth element (REE) beneficiation study. This will test various methods to separate the valuable monazite mineral from the rock sample, and test whether any other elements are present which could complicate extraction of the ore mineral.

Searchlight is exploring an occurrence of high grade monazite which has systematically been exposed in trenches and sampled through a series of diamond saw outcrop cuts which have grades of Total Rare Earths approaching the theoretical maximum for the mineral monazite, a preferred ore mineral for rare earths.

The best way to think about monazite is to consider the analogy with an automobile. The mineral is the car with a phosphate body, which can transport rare earth passengers as well as thorium and even uranium. In the case of Searchlight’s monazite samples, the main economic rare earths of interest are the magnet metals, Neodymium and Praseodymium which are used in highly efficient electric motors for wind turbines and electric vehicles.

Significantly for investors, a brand-new CAD 50 million rare earth processing plant is scheduled to come online in Saskatoon, SK in the next two years. The construction of this plant was financed with public funds. The plant has already produced magnet metal ingots and will be ramping up to commercial scale over the next several months. The plant is designed to exclusively process the mineral monazite. Searchlight is one of only two companies with high grade monazite zones at surface in Saskatchewan. The high-grade monazite samples found by Searchlight were collected in a region which has roads as well as mining infrastructure and could be delivered to the new processing plant with comparative ease. Currently, the new monazite processing plant does not have a secure REE feedstock supply, as the importation of monazite sands from Brazil is problematic due to the unexpectedly expensive logistics for the feedstock. The mineral monazite is slightly radioactive and must be declared as a hazardous material when transported. Within Saskatchewan, transportation is less challenging and less expensive.

The study, if successful, could provide a major incentive for Searchlight to begin a resource definition drilling program at Kulyk Lake. 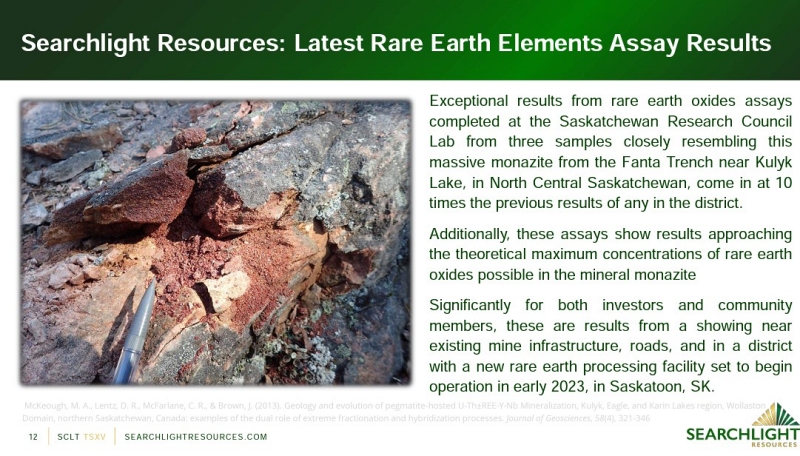 Stephen Wallace, Searchlight's Chief Executive Officer said, "These tests are an important step in understanding the chemistry of the high-grade Fanta monazite deposit at Kulyk Lake and assessing whether the material can be processed at the SRC rare earth processing plant."

The Kulyk Lake Critical Elements project is located approximately 165 kilometers north of La Ronge, Sask, and 65 kilometers south of the Key Lake uranium mine. The project covers 346.7 square kilometers with several rare earth targets, including the high-grade Fanta rare earth target. The 37 claim blocks at Kulyk Lake were all acquired by staking and are 100% owned by Searchlight Resources, royalty free.

Conclusion. Searchlight Resources has focused on its Kulyk Lake uranium/REE project this season. Geologists have been to the project three times to explore the nearly 10 kilometer long pegmatite dyke. With the hoped-for uranium grades not confirmed, the focus has shifted to rare earth elements in the central part of the pegmatite. The REE grades historically measured there are extremely high. Nearby Saskatoon would offer ideal conditions for processing a monazite concentrate, given the short distances involved. In addition, the newly built plant is actively searching for suitable material. It will be interesting to see how the tests for the extraction of REE turn out. However, the host mineral, monazite, is well known in the industry and should not present any major challenges. Good results would catapult Searchlight out of nowhere into the group of promising REE companies.

Risk notice: GOLDINVEST Consulting GmbH offers editors, agencies and companies the possibility to publish comments, analyses and news on http://www.goldinvest.de. These contents serve exclusively the information of the readers and do not represent any kind of call to action, neither explicitly nor implicitly they are to be understood as an assurance of possible price developments. Furthermore, they are in no way a substitute for individual expert investment advice and do not constitute an offer to sell the stock(s) discussed or a solicitation to buy or sell securities. This is expressly not a financial analysis, but explicitly promotional / journalistic texts. Readers who make investment decisions or carry out transactions on the basis of the information provided here do so entirely at their own risk. There is no contractual relationship between the GOLDINVEST Consulting GmbH and its readers or the users of its offers, because our information refers only to the company, but not to the investment decision of the reader. The purchase of securities involves high risks, which can lead to a total loss of the invested capital. The information published by GOLDINVEST Consulting GmbH and its authors is based on careful research. Nevertheless, any liability for financial losses or the content guarantee for topicality, correctness, adequacy and completeness of the articles offered here is expressly excluded. Please also note our terms of use.

GOLDINVEST Consulting GmbH currently has a remunerated contractual relationship with the company, which is reported on the website of GOLDINVEST Consulting GmbH as well as in the social media, on partner sites or in email messages. The above references to existing conflicts of interest apply to all types and forms of publication that GOLDINVEST Consulting GmbH uses for publications on Searchlight Resources. We also cannot exclude that other stock letters, media or research firms discuss the stocks we recommend during the same period. Therefore, symmetrical information and opinion generation may occur during this period. No guarantee can be given for the correctness of the prices mentioned in the publication.

How Searchlight could rewrite the textbo... From everyday life, everyone knows that you only find what you know. This experience can be illustrated parti... 872 views Mon, 18 Jul 2022, 03:17:38