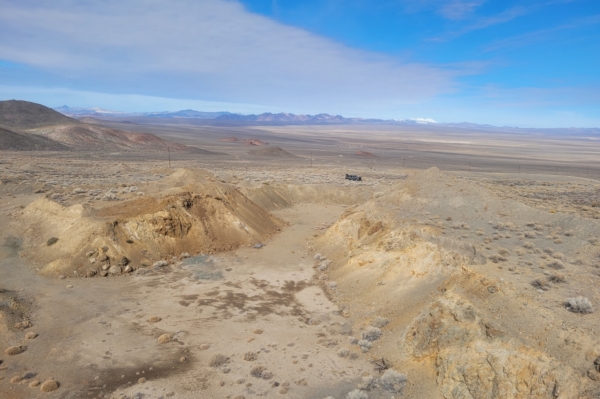 Hopefully the hits keep coming: With each additional batch of drill holes that P2 Gold Inc. (TSXV:PGLD; FRA:4Z9) releases from its advanced-stage Gabbs copper-gold project in Nevada, it becomes clearer that historical drill holes may have systematically underestimated the thickness and grade of gold-copper mineralization. P2 Gold has just published the results of twelve 12 reverse circulation ("RC") drill holes (GBR-001 to 012) from the Sullivan sub-project. The best drill holes intersected 2.30 g/t gold equivalent over 48.77 meters and 2.63 g/t gold equivalent over 38.10 meters.

Joe Ovsenek, President and CEO of P2 Gold commented, "Consistent with the diamond drill results we recently reported, the mineralization intersected in the first 12 RC drill holes is thicker and higher grade than defined in historical drilling."

In the lab, there are an additional 11 RC holes from the Sullivan zone, as well as three holes from the Car Body zone and one hole from the Lucky Strike zone. All three zones are part of the Gabbs project. Results from these drill holes are expected to be released before the end of the year.

Figure 1: The Sullivan subproject is dotted with drill holes. Each black dot indicates a historical drill hole. P2 Gold's new drill holes are aimed at confirming, refining and, if necessary, extending the historical results. The latter, in particular, has been very successful to date.

The RC program began at the northwest extent of the Sullivan Zone, with holes GBR-001 to 007 intersecting footwall lithology where the monzonite hosting the high-grade mineralization was removed. However, there is evidence that it is preserved in the southwest of these drill holes where no historical drilling has been conducted. Future drill holes will test this extension of mineralization.

Holes GBR-008 to 012 intersected the strongly sericite altered monzonite that hosts the high grade mineralization, with copper-gold mineralization extending well into the underlying chlorite altered pyroxenites. As is also evident from the diamond drill results, the grade and thickness of the mineralization in the RC drill holes increases in a southeast direction. Drill holes GBR-011 and 012, drilled furthest to the southeast of these drill holes, ended in significant gold-copper mineralization, indicating that the Sullivan Zone is thicker than interpreted in historical drilling.

Summary: Interest in P2 Gold has been increasing noticeably for the past few weeks, with the stock trading at $0.57 CAD, or nearly 15 percent above the last placement price of $0.50 CAD. Apparently, the positive results from the Gabbs project are slowly starting to have an effect. Historically, 1.8 million gold equivalent ounces have already been confirmed as a resource at Gabbs. If P2 Gold continues at this pace, this resource could grow significantly in the foreseeable future - in terms of volume, but also primarily through higher average grades. At a much earlier stage is the BAM project in British Columbia's Golden Triangle. It is P2 Gold's second project. But even there, P2 Gold has made a lot of progress this season with only six drill holes. P2 Gold is currently valued at about CAD 36 million and has issued about 62 million shares.