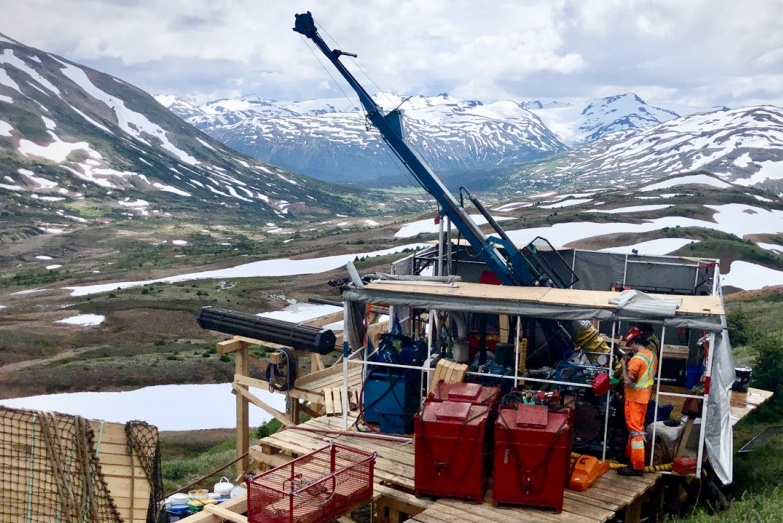 Just a few days ago, we reported that the first quarter of 2021 could be very eventful for gold and copper explorer P2 Gold (WKN A2QCBZ / TSXV PGLD) - and we were right, as it seems. Because CEO Joe Ovsenek's company just announced the first resource estimate for the BAM project in British Columbia's Golden Triangle, which amounts to more than half a million ounces of gold equivalent (gold and silver), already!

Located near surface in the so-called Monarch Zone, P2 Gold proved the deposit with drilling totaling nearly 15,000 meters in 2021 and 2022. As CEO Ovsenek pointed out, just 18 months passed from the discovery to the announcement of the initial resource.

P2 Gold has made what we believe is a very good start with this resource, which, as the P2 Gold CEO continues, demonstrates the potential extent of the porphyry system at depth that feeds the surface mineralization. Currently, the company has proven the Monarch gold zone over a strike length of about one kilometer, leaving it open in numerous directions. It is located within a large sericite/ankerite alteration system, the company adds, which covers the western half of the property.

P2 Gold puts the initial gold resource for the Monarch Zone at 520,000 ounces of gold and 2.21 million ounces of silver, giving 550,000 ounces of gold equivalent at an average grade of 0.62 grams per tonne. The mineral resource estimate, which is limited to one potential pit, starts at surface and extends to a depth of 190 metres. 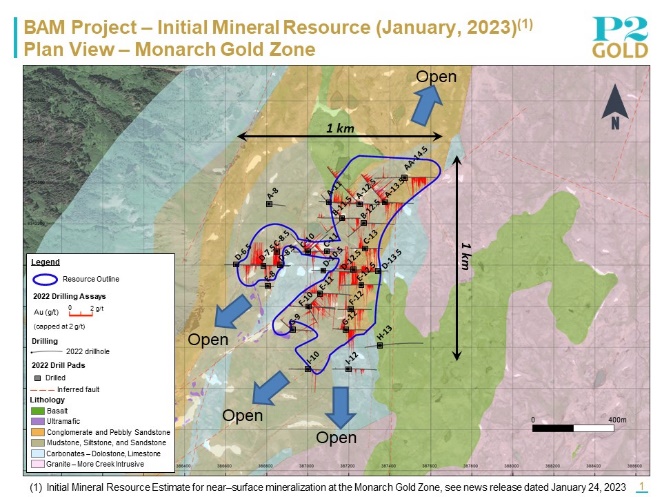 As CEO Ovsenek further explains, the extent and intensity of mineralization and alteration systems clearly indicate a substantial porphyry system at depth. Using information gained from 2022 drilling at BAM, as well as airborne and ground geophysics, P2 Gold will focus this year on exploring for the feeder zones and the porphyry system at depth, while working to expand near-surface mineralization, too. The Company expects to send its crews to the BAM project in mid-May and it is anticipated that the first drill rig will then be on site in early to mid-June.

A three-dimensional geophysical interpretation of the BAM project, incorporating the results of a Natural Source Magneto-Telluric (NSMT) geophysical survey and an airborne Z-Tipper Axis Electromagnetic (ZTEM) geophysical survey, is expected to be completed shortly, the company added. P2 Gold will merge this interpretation with available drill data and surface mapping to generate targets for BAM's 2023 exploration program, which, as stated, is intended to test the feeder zones and porphyry system at depth.

Conclusion: With this first resource estimate presented today, P2 Gold has, in our opinion, made a very good start at BAM, especially since the potential to significantly expand the proven mineralization both near the surface and at depth appears clear. We look forward to further exploration and drilling at BAM, which is expected to resume in May. In the meantime, a resource update for the Gabbs project is pending, which, if everything goes really smoothly, will be followed by a first economic assessment (PEA) of Gabbs, maybe even this quarter. We will stay tuned, of course!

Disclaimer: GOLDINVEST Consulting GmbH offers editors, agencies and companies the possibility to publish comments, analyses and news on http://www.goldinvest.de. These contents serve exclusively the information of the readers and do not represent any kind of call to action, neither explicitly nor implicitly they are to be understood as an assurance of possible price developments. Furthermore, they do not in any way replace individual expert investment advice and do not constitute an offer to sell the stock(s) discussed or a solicitation to buy or sell securities. This is expressly not a financial analysis, but an advertising / journalistic text. Readers who make investment decisions or carry out transactions on the basis of the information provided here do so entirely at their own risk. There is no contractual relationship between GOLDINVEST Consulting GmbH and its readers or the users of its offers, because our information refers only to the company, but not to the investment decision of the reader.