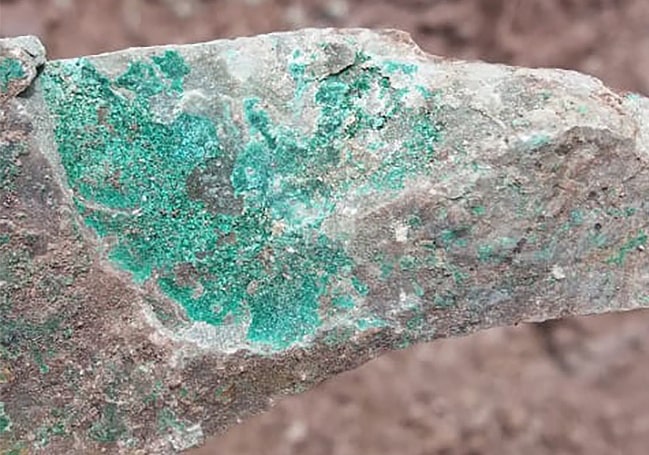 Coffin, who himself comes from a mining family, has been in the business as a geologist and investor for more than 30 years and has a large following. That his judgment carries weight can be seen not least in the recent share price performance. Yesterday, Max Resource reached a new high for the year of $0.52 CAD on above-average volume and closed at $0.50 CAD.

Coffin, in his own personal style, tells how he gradually became comfortable with investing in Max Resource after having had the company on his watch list for more than a year. He cites two things that finally convinced him: First, the discovery of rich copper-bearing vertical structures at the URU project, and second, Max Resource's ability to secure licenses.

Literally, Coffin writes, "My opinion changed after the discovery of URU, but even more so after Max had been successfully awarded a large number of concessions in the last two or three months. The initial work was very encouraging, but the presentations were confusing in part because Max was cautious about announcing the exact locations before the concessions were formally granted. Now that the concessions are in place and a LIDAR survey is underway that will provide much better topographic data, the presentations will likely become more coherent and user-friendly. The most important news came from the recent discovery at URU. Unlike most other discoveries, Max has sampled a near vertical zone with a true thickness of 10-25 meters.

The copper in this zone is all chalcocite, with no chalcopyrite and very little bornite. Chalcosine is 80% copper, which explains why the sometimes innocuous looking rock has such high values. In the higher part of the zone there were a number of tunnels over 100 years old. Max has found no record of them, but believes they are probably old Spanish tunnels created by miners who were prospecting for silver. Like all of Max's discoveries, URU contains silver, although the silver-to-copper ratio appears to be lower than at some of the northern targets in the belt. It is not yet known whether this is just a local phenomenon where sampling has taken place, or whether URU has consistently lower silver values. It is important to remember that no modern exploration or drilling has ever been done in any of the MAX target areas, URU included. This area is still completely open.

The key to URU is both thickness and orientation. A press release early last month reported 45 horizontal channel samples from the zone taken over 320 meters of vertical relief from the river basin to the top of the hill. The zone is open at depth. The list of key channel results below gives an idea of the grades and thicknesses of the samples collected. Intermittent sampling traced the zone over 320 meters of vertical relief and 1.6 km of strike."

Coffin's entire analysis can be accessed at the following link: https://bit.ly/3Ll7pFc

Risk note: The contents of www.goldinvest.de and all other used information platforms of the GOLDINVEST Consulting GmbH serve exclusively the information of the readers and do not represent any kind of call to action. Neither explicitly nor implicitly they are to be understood as an assurance of possible price developments. Furthermore, they do not replace in any way an individual expert investment advice, but rather represent promotional / journalistic texts. Readers who make investment decisions or carry out transactions on the basis of the information provided here do so entirely at their own risk. The acquisition of securities involves high risks, which can lead to a total loss of the invested capital. The GOLDINVEST Consulting GmbH and its authors expressly exclude any liability for financial losses or the content guarantee for topicality, correctness, adequacy and completeness of the articles offered here. Please also note our terms of use.