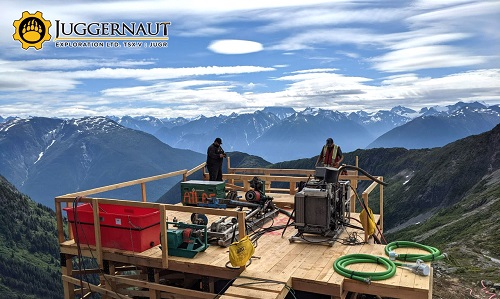 The rapid retreat of glacier and snow cover in British Columbia's alpine terrain is enabling discoveries that would not have been possible years ago. Since 2019, this has been impressively demonstrated by Juggernaut Exploration Ltd (TSXV: JUGR; FRA: 4JE) with its extensive portfolio of early-stage projects on the central coast in British Columbia.

The Company has already made several discoveries on the Gold Standard license, which covers approximately 40 square kilometers and is located only 4 kilometers from the nearest township, and has identified individual significant veins within a few kilometers. The Gold Standard property includes seven known extensive quartz-chlorite-sulfide veins up to 20 meters wide and 1000 meters long. All veins are believed to be derived from the same deep-rooted shear system. Of these veins, only a small section of the Kraken, Phoenix and Goldzilla veins have been drill tested to date, while the majority of these veins remain untested.

This season, for the first time, the Kraken vein in the west of the license was successfully tested by seven holes (1947 m). As reported by the Company in today's announcement, all drill holes on the Kraken vein have intersected significant intervals of robust sulphide mineralization in quartz veins and/or quartz-chlorite schist. The thickness of the intercepts ranges up to 41.43 m (in drill hole GSD-22-20). Laboratory results are not yet available.

The seven drill holes along 80 meters of strike on the Kraken vein are believed to capture only the smallest portion of the mineralization. Kraken is up to 15 meters wide and has been traced at surface over a length of 1 km with a vertical extent of 520 meters and remains open. Channel samples from 2019 returned grades of 29.48 gpt AuEq over 0.7 m and a 1 m chip taken 305 m along strike returned grades of 6.52 gpt Au and remains open.

Figure 1: Overview of distinct vein structures in alpine terrain at the Gold Standard project. The Kraken vein is located to the west of the exploration window. It can be traced over one kilometer of strike length and has a vertical extent of at least 520 metres.

Dan Stuart, President and CEO of Juggernaut Exploration, stated, "The drill core observed this season far exceeded our expectations and had mineralization and texture very similar to those observed in last season's high grade channels and drill core samples. The Gold Standard property continues to move rapidly in the right direction and has great potential to become the next major gold discovery."

Highlights of the Goldzilla Vein

In addition to the new Kraken vein, drilling this season has also been conducted on the Goldzilla vein, which is already known from previous drilling. There too, all drilling to date has intersected sulphide mineralization consisting of pyrite and minor chalcopyrite strands and aggregates within massive quartz veins and/or quartz-chlorite schists up to 24.25m. The total strike extent of the drilled Goldzilla vein was extended by 70 m to 870 m, confirming the extent of the mineralized system, which remains open to the southeast and at depth. Drill hole GSD-22-12 (azimuth 140, dip 45) intersected 24.25 m of sulfide mineralization in a massive quartz vein surrounded by strongly foliated quartz-chlorite schist from 213.65 m to 237.90 m (Figure 9, Figure 10, Figure 11). Future drilling based on positive assay results is planned to test the Goldzilla vein at depth and along strike for up to 1.2 km to the SE.

Pending results, the Goldzilla vein has been traced at surface for 870 m with 320 m of vertical relief. Five potential new drill hole locations have been explored and confirmed to the SE, with a focus on testing Goldzilla along strike and at depth, which could extend the strike extent of the Goldzilla Vein to 1.2 km with a vertical relief of 400 m, which remains open to the SE and at depth.

Conclusion: The discovery potential on Gold Standard is enormous. Juggernaut is just at the beginning. Results from the Gold Standard property have confirmed the presence of a strongly gold mineralized deep-rooted system at surface and at depth, where veins occur in an en echelon pattern to the regional north-northwest orientation of the main shear zones. Approximately 67% of Canadian gold production is from orogenic systems. Examples include the nearby Bralorne Pioneer Camp in British Columbia (4.17 Moz) with a depth of ~2 km and many other regions within the Canadian Shield including Kirkland Lake (>40 Moz), Timmins (>70 Moz), Val d'Or/Noranda (>69 Moz) and Red Lake Gold Camps (>29 Moz). These gold deposits generally have average mining grades of 5 g/t Au to 15 g/t Au.

According to §34 WpHG we would like to point out that partners, authors and/or employees of GOLDINVEST Consulting GmbH hold shares of some of the mentioned companies and therefore a conflict of interest exists. Furthermore, we cannot exclude that other stock exchange letters, media or research firms discuss the stocks we discuss during the same period. Therefore, symmetrical information and opinion generation may occur during this period. Furthermore, there is a consulting or other service contract between some of the mentioned companies and GOLDINVEST Consulting GmbH, directly or indirectly, which also means that there is or can be a conflict of interest.