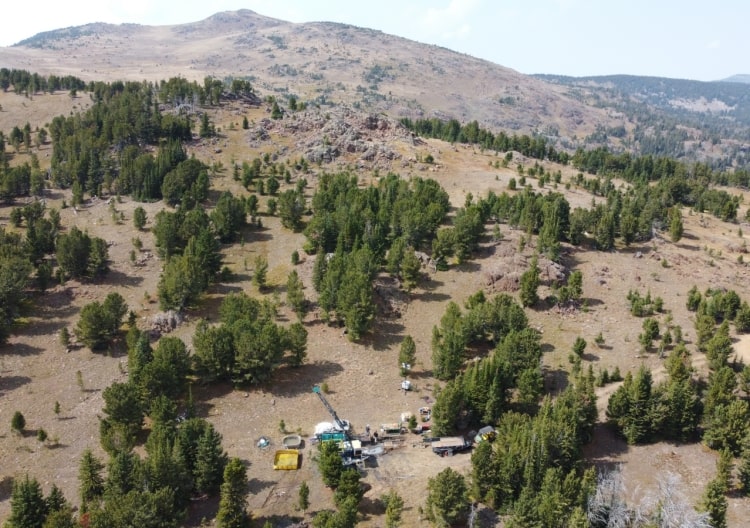 At this point, the Company should just call itself “Critical Minerals, USA”. With these most recent, exceptionally  strong drill results, Group Ten Metals (TSXV: PGE; FRA: 5D32) is backing up the world-class potential of its polymetallic Ni-PGE-Cu-Co-Au Stillwater West project in Montana, USA, one step at a time. The three just-released step-out drill holes (with five more from 2021 pending) are delivering near-surface, high-grade intercepts for critical minerals that are among the best yet found in the Stillwater district, which also hosts the adjacent Stillwater mines operated by Sibanye-Stillwater – which just happen to be the highest grade PGE mines in the world.

In hole CM2021-05, which is continuously mineralized over 400.8 meters, 13.2 meters of 3.33% percent nickel equivalent (2.1% nickel alone) were measured in the interval between 37.6 and 50.8 meters. Also significant is the fact that the step-out drilling is up to several hundred meters from the existing resource estimate block models. Therefore, as with the results released on March 7, 2022 and December 20, 2021, the latest drilling results show significant potential to expand the October 2021 Mineral Resource estimates (see attached table) - both in terms of tonnage, but also in terms of average grades. 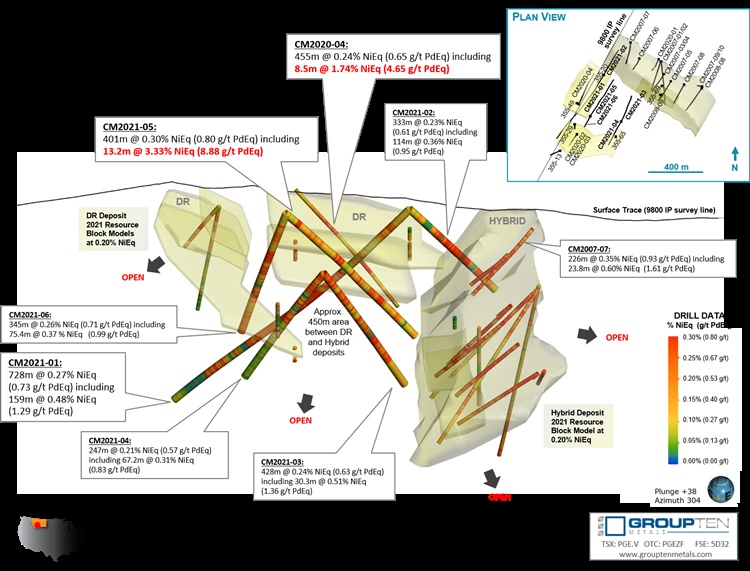 Increasingly evident is the structural analogy between Stillwater-West and world-class polymetallic projects in the northern Bushveld, South Africa, which are also based on magmatic intrusions. Stillwater West, however, has the added advantage that the deposited layers do not run horizontally at depth as in South Africa (at Ivanhoe's Platreef Mine where the mineralized horizon is after all 700 meters deep), but were rotated by geologic activity such that they come close to the surface.

No one can confirm this analogy to Bushveld more credibly than Group Ten's new Vice-President of Exploration, Dr. Danie Grobler. Prior to joining Group Ten, Dr. Grobler was Head of Geology and Exploration at Robert Friedland’s Ivanhoe Mines where for the past 11+ years he led the delineation and advancement of the Platreef PGE-Ni-Cu mine. His comment is, "I am pleased to apply the experience I have gained over the past two decades on the Platreef in the northern Bushveld Complex to Group Ten's Stillwater West project. We see significant comparability with Platreef-style mineralization in the lower Stillwater Complex and, in particular, early indications of higher grade Flatreef-style mineralization targets within the project's layered magmatic stratigraphy."

Michael Rowley, President and Chief Executive Officer, added, "The high-grade intercept in hole CM2021-05 is the latest in a series of exciting discoveries made by our team in the lower Stillwater Complex through the development of a new geological predictive model. This remarkable intercept has the same high-grade nickel sulfide mineralization as a similar intercept in CM2020-04, 125 meters away, and is located in an area completely outside the current resource block model. Further stepouts on this new target, which lies between the existing DR and hybrid deposit areas, will be a priority in the coming season. We look forward to reporting additional remaining drill results from the 2021 Iron Mountain drilling, exploration plans for 2022 and other news in the near future."

Bottom line: successful exploration is not just about what you find, but why you find it. It's about whether, the underlying model is correct. That's where the real significance of the recent drilling successes lies. They show that Group Ten's predictive model works. That bodes well for the coming season.

Disclaimer: GOLDINVEST Consulting GmbH offers editors, agencies and companies the possibility to publish comments, analyses and news on http://www.goldinvest.de. These contents serve exclusively the information of the readers and do not represent any kind of call to action, neither explicitly nor implicitly they are to be understood as an assurance of possible price developments. Furthermore, they do not in any way replace individual expert investment advice and do not constitute an offer to sell the stock(s) discussed or a solicitation to buy or sell securities. This is expressly not a financial analysis, but an advertising / journalistic text.