Will Goliath Resources repeat its 2021 success at the Surebet Gold Zone?

Once again, Goliath Resources (TSXV GOT / WKN A2P063) is reporting very encouraging data from its already huge Surebet gold discovery. A number of drill holes have encountered the kind of mineralization that "classically" occurs in the Surebet zone of the Golddigger project.

To date, a staggering 64 holes overall have encountered intercepts of this style of sulfide mineralization, which consists of a combination of galena, sphalerite and pyrrhotite in semi-massive to massive veins, strands, interstices in brecciated zones and/or as stringers throughout the rock.

The extensive mineralization system of the Surebet Zone proper now encompasses an area of 1.4 square kilometers. More than 20,000 of the planned 27,000 drill meters of the campaign have been completed. As Goliath points out, the Surebet system remains open in all directions and drilling continues. To date, assay results from the laboratories on all 2022 drilling are pending. Goliath will present these as soon as they are received, compiled and interpreted - exciting prospects for this fall, then! 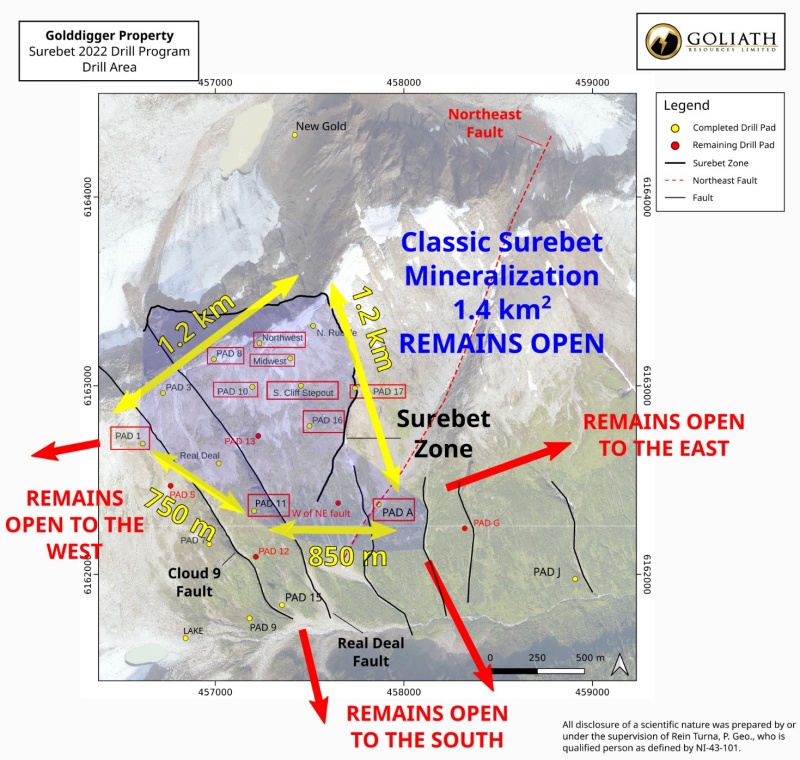 Several drill holes, including GD-22-83 (from pad 17), GD-22-77 (from pad 10), GD-22-36 (from pad 11), and GD-22-68 (from pad 16), have intersected multiple zones characterized by Surebet Zone-like mineralization, including galena, and textures, suggesting the presence of multiple stacked mineralized shear zones that are part of the same mineralized system that remains open in all directions.

That Goliath has encountered this mineralization, typical of the Surebet Zone, in 64 drill holes over an area of more than 1.4 square meters clearly demonstrates the continuity and extent of the system, which also remains open. As Goliath CEO Roger Rosmus also points out, the occurrence of comparable zones of similar mineralization and textures in the "East Extension" area greatly expands the known parameters of the Surebet discovery and once again confirms the large extent of the Surebet system.

Goliath's primary focus with the 2022 drilling campaign is on infill drilling that could be used for resource calculation. In addition, they plan to test the Surebet mineralization system at depth over an extensive area extending west to Lake Pad and New Gold to the north. This is being done by planning multiple drill locations as far west as Real Deal to reach the Surebet system at depth, based on the model created from this year's drill logs, 2021 drill logs and results, and 2020 trench sample results. Numerous, distinct samples collected on the Real Deal and Cloud 9 substructures, believed to be associated with the Surebet Zone, returned significant gold and silver grades, confirming the presence of a large, gold and silver-rich mineralized system at depth, according to Goliath. The company's geologists interpret these structures as conductors that have carried fluids to surface.

Conclusion: Goliath is pushing ahead full speed with drilling at Surebet and has already successfully completed a large part of the planned drill campaign. Drills continue to encounter thick intervals of mineralization typical of the Surebet Zone, which averaged 6.29 g/t gold equivalent over 5.87 meters of width in the 2021 drill campaign - over a total of 24 holes! Should these results, or similar, also be achieved for the 2022 drilling campaign, we believe this would be a huge success and could give the Goliath share price a significant rerating higher. Of course, Goliath Resources is still a risky speculation, but with repeated drilling successes of similar looking mineralization of galena and sphalerite in the drill core compared to 2021 drill core could significantly de-risks the assays outcome and the potential would become even clearer once confirmed. In any case, the decision is getting closer.