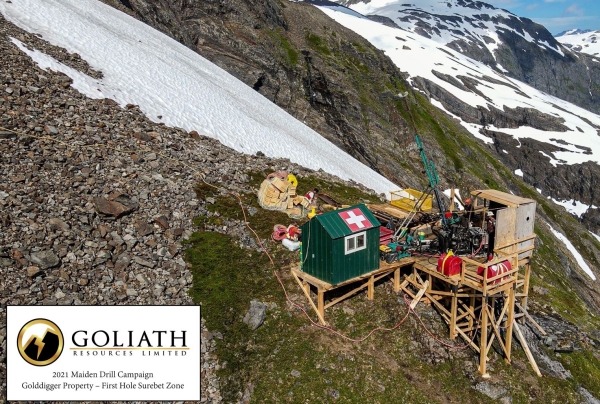 The winning streak continues as the seventh hole drilled by Goliath Resources (WKN A2P063 / TSXV GOT) to test the Surebet zone at its Golddigger project in British Columbia's "Golden Triangle" has once again returned a very thick interval - 48.2 meters* - of extensive quartz sulphide veins, traced some 600 meters north of the North of Cliff drill site.

This means that all seven Surebet drill holes completed to date, have revealed significant thicknesses of veins and sulphides and it is becoming apparent that the Surebet polymetallic gold and silver zone is a very robust mineralization system.

Goliath also reported that analysis with a portable XRF instrument returned 2,293 g/t silver, 0.09% copper, 0.20% zinc and 1.68% lead. We believe this to be very encouraging, although XRF data is not as reliable as standard analytical methods and cannot reliably detect gold, but the aformentioned pathfinder elements.** Drill core from the polymetallic mineralization in the five holes from the Cliff site and now the two holes from the North site have already been sent to the lab for analysis, though, and according to Goliath, the first set of results should be ready shortly!

With GD21-006 and now GD21-007 completed some 600 meters north of the North of Cliff site, Goliath confirms extent and orientation of the sulfide mineralization, which also remains open in all directions. The Company will now drill at least four more fan holes at the North site and will also drill further fan holes at Surebet's Lower and Upper Waterfall, Main and Central showings to test the approximately 1,000 meters of strike occurring at surface. This will be supplemented by drilling to test the mineralization structure in the down-dip to the extent of 500 metres.

In addition, given the polymetallic mineralization observed to date, Goliath is now deploying a second drill rig to advance things as quickly as possible. A total of approximately 5,000 meters of drilling is planned, which the company intends to use to test Surebet both along strike and at depth.

It is also interesting to note that a recent flown geophysical survey and 3D magnetic model indicate a magnetic high to the west and below the Surebet zone, suggesting an intrusion that could serve as the source of this extensive system of high-grade gold and silver mineralization.

Conclusion: With its seventh drill hole, Goliath Resources again confirms the massive mineralization of the polymetallic Surebet Zone and once again suggests that it could be on the trail of something big. The XRF results also indicate where the journey could go in terms of metal grades. We are now looking forward to the first analysis results from the laboratory, which should be available shortly according to Goliath!

* The stated lengths in meters are downhole core lengths and not true widths. True widths will be calculated once more drilling can confirm the exact geometry of the quartz-sulphides system.

** Readers are cautioned that Portable XRF (X-Ray Fluorescence) spot counts are not equivalent to laboratory assays; they simply give an indication of the presence of certain metal elements in the drill core. Spot measurements referenced here were collected using a Niton XL3t XRF Analyzer, which cannot reliably detect Gold, but does detect the geochemical pathfinder elements such as Silver, Copper, Zinc, Lead and Tungsten that are commonly associated with Gold. Assay results are pending.

Disclaimer: GOLDINVEST Consulting GmbH offers editors, agencies and companies the possibility to publish comments, analyses and news on https://www.goldinvest.de. This content exclusively serves the information of the readers and does not represent any kind of call to action, neither explicitly nor implicitly is it to be understood as an assurance of possible price developments. Furthermore, it in no way replaces individual expert investment advice, but rather is promotional / journalistic publications. Readers who make investment decisions or carry out transactions on the basis of the information provided here, do so entirely at their own risk. The acquisition of securities, especially with shares in the penny stock area, carries high risks, which can lead to a total loss of the invested capital. The GOLDINVEST Consulting GmbH and its authors expressly exclude any liability for financial losses and do not guarantee topicality, correctness, adequacy and completeness the of the articles offered here. Please also note our terms of use.

According to §34b WpHG i.V.m. FinAnV (Germany) and according to section 48f paragraph 5 BörseG (Austria) we would like to point out that principals, partners, authors and employees of GOLDINVEST Consulting GmbH hold or may hold shares of Goliath Resources and therefore a possible conflict of interest exists. We also cannot rule out that other stock letters, media or research firms discuss the stocks we recommend during the same period. Therefore, symmetrical information and opinion generation may occur during this period. Furthermore, there is consulting or other service contract between Goliath Resources and GOLDINVEST Consulting GmbH, which means that a conflict of interest exists.

Early season start for Brixton Metals at... The summer season in far northern British Columbia is open, earlier than ever before. Brixton Metals Corporat... 94 views Tue, 24 May 2022, 15:08:02