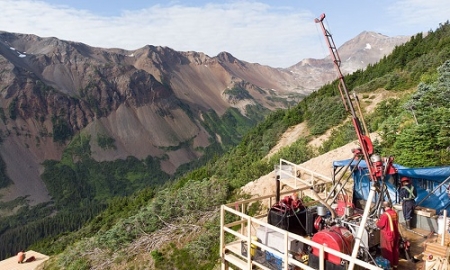 Goliath sees the renewed success as evidence of the robust nature of its extensive polymetallic gold-silver mineralized discovery. A fifth hole (GD21-005; planned depth of ~75 meters; 340⁰/-45⁰) is currently being prepared to the north-northwest again from the same drill site. It is also expected to intersect the Surebet mineralized shear zone near surface. July 30 2021 - image 1 - Goliath Resources Limited TSX-V: GOT (goliathresourcesltd.com)

The latest drill hole also appears to confirm the sandwich hypothesis, which delineates an upper and lower vein (the two slices of toast) at Surebet, with finer mineralization safely located between them (lettuce and sausage). 1.6 meters of the upper vein or "main vein" contains quartz, pyrrhotite, galena, sphalerite and chalcopyrite and is very similar in appearance to the mineralized sections of GD21-001, GD21-002 and GD21-003. It is surrounded by 5.5 meters of intense shearing and brecciation of the adjacent host rock which contains up to 30% similar quartz-sulfide veins. Two significant sections of the lower vein comprise 2.1 meters and 3.0 meters of coarse-grained white quartz with accumulations of pyrrhotite, sphalerite, galena and chalcopyrite.

Goliath's portable XRF point counts of galena consistently returned values from 10 to 100 g/t Ag, with values up to 1030 g/t Ag.

The Principal Vein in GD21-004 is located approximately 20 meters up-dip from the top of the mineralization in GD21-003, while the lower limit of the quartz-sulfide vein is 30 meters from the base of the GD-21-003 intercept.

The Principal Vein is intersected 30 metres below the surface of the southernmost Cliff occurrence where a fresh grab sample from 2019 returned 967.99 g/t gold equivalent or AuEq (29.72 oz/t gold, 97.19 oz/t silver). The deposit remains open in all directions.

Goliath is planning additional fan drilling for four additional locations along the Surebet Zone to test the 1000 metre strike length exposed at surface. The second phase of the drill campaign in 2021 will include step-back drilling to test the mineralized structure over a down-dip length of 500 metres.

Conclusion:
Surebet - meaning "safe bet" - really lives up to its name. Each of the four holes drilled so far shows thick intersections of quartz-sulfide veins and also confirms the sandwich structure of the deposit. We are only at the beginning of the drilling season and probably not even 20 percent of the drill meters have been completed. So there is still a lot to come this season! On the other hand, the results are preliminary, because what is still missing are the drill core anlays from the laboratory. It's hard to imagine what would happen if those assays even remotely match the values Goliath 2020 determined from grab samples along Surebet's surface. In the meantime, Goliath's stock reported a new all-time high of $1.62 CAD this week. Keep up the good work, Goliath!