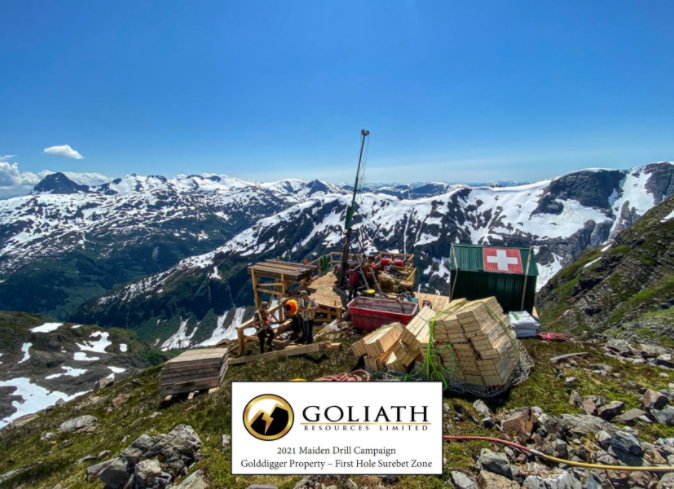 Who knows what good it did Goliath Resources (TSX-V: GOT; FRA: B4IF) two years ago when it failed to hit the ground running in its drill holes at the Luckystrike gold porphyry target. It is no exaggeration to say that without the failure, the Surebet polymetallic discovery at the Golddigger project in the Golden Triangle would not have been made, or at least not as quickly. Surebet is now clearly Goliath's number one priority. A comprehensive update on the results of >5,000 meters of drilling should be due no later than early next year.

In the meantime, Goliath is now reporting a late exploration success on its Luckystrike project after all, which the company now owns 49 percent of. Geologists believe they have discovered the center of the porphyry. They refer to it as a bullseye zone. In the heart of this zone (see Figure 1), porphyry mineralization of up to 3.06 g/t Au, 54.9 g/t Ag and 1% Cu has been confirmed in combination with porphyry textures and mineralization (including chalcopyrite and bornite) within potassic altered coarse-grained intrusive units. Potassic alteration is considered a very convincing porphyry indicator when encountered in combination with chalcopyrite and bornite in fractures. 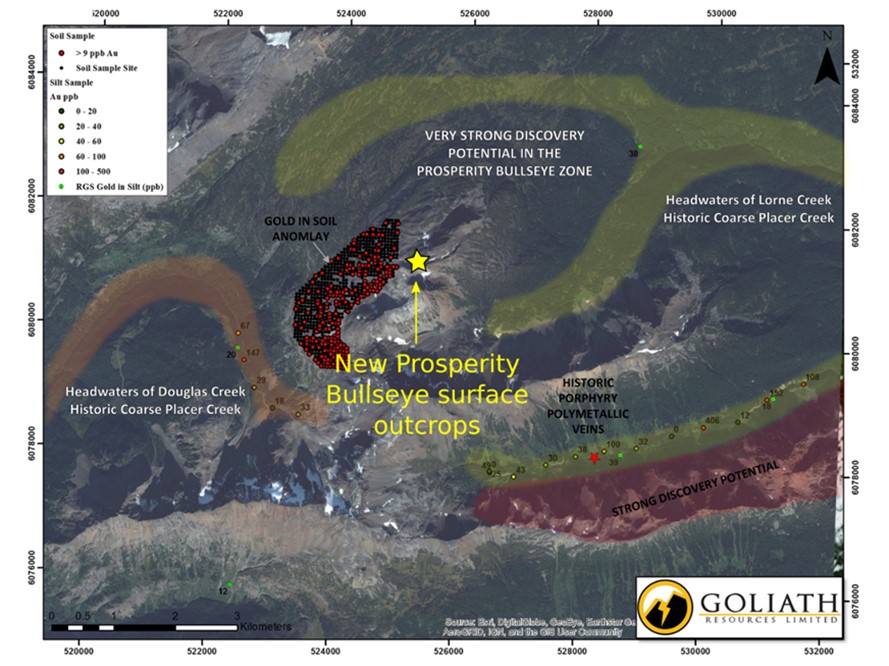 The Prosperity Bullseye Porphyry target area has been mapped at surface and defines a large 1,200 x 1,000 meter alteration system. Only one exploratory hole was completed in 2018, located far west ~650 meters from the newly identified Bullseye Zone and drilled WSW at an inclination of 70 to a depth of 500 meters, without being targeted or designed to intersect the newly identified Bullseye Zone. The area contains a quartz-sericite-pyrite (QSP) core coincident with molybdenite-chalcopyrite mineralization (see news release dated October 2, 2018).

The Luckystrike property is located within a larger known porphyry belt. Goliath Resources has designed a 3D porphyry model measuring 2500 x 1500 x 500 meters (click here) and provides a video update on the recent discovery on its webstie (click here). For now, however, Luckystrike is likely to remain junior. However, it could be a project that Goliath could option to third parties.

According to §34b WpHG i.V.m. FinAnV (Germany) and according to section 48f paragraph 5 BörseG (Austria) we would like to point out that principals, partners, authors and employees of GOLDINVEST Consulting GmbH hold or may hold shares of Goliath Resources and therefore a possible conflict of interest exists. We also cannot exclude that other stock letters, media or research firms discuss the stocks we recommend during the same period. Therefore, symmetrical information and opinion generation may occur during this period. Furthermore, there is the prospect of a consulting or other service contract between Goliath Resources and GOLDINVEST Consulting GmbH, which means that a conflict of interest exists.