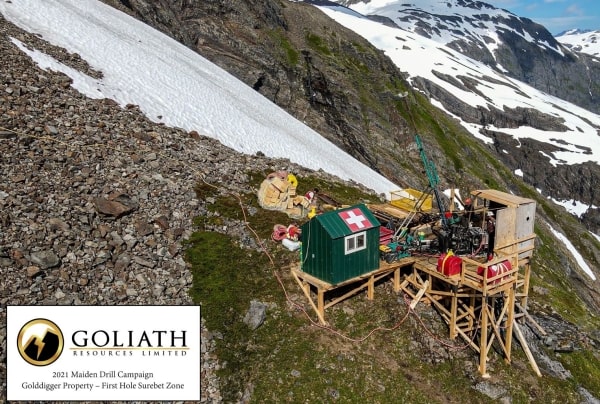 {kanad_flagge}The bet for Goliath Resources Limited (TSX-V: GOT; FRA: B4IF, OTCQB: GOTRF) is paying off. The company has confirmed the world-class potential of the "Surebet Zone" at its Golddigger project in British Columbia's Golden Triangle with the full release of all 2021 drill results. All 24 drill holes drilled in 2021 have hit a well-defined, continuous zone of significant high-grade gold-silver.

A total of 5,332 meters of drill holes from seven different widely spaced drill stations were evaluated. These drill holes now delineate a "mineralized sandwich" (see Figure 1) with an extent of at least 1 kilometer by 1.1 kilometers. The weighted average drill hole length and grade of the 24 drill holes is 5.87 meters and 6.29 g/t AuEq, respectively. Goliath Resources intends to further expand and secure the Surebet discovery through infill drilling. Therefore, the company plans to more than triple drill holes to 18,000 meters this year. 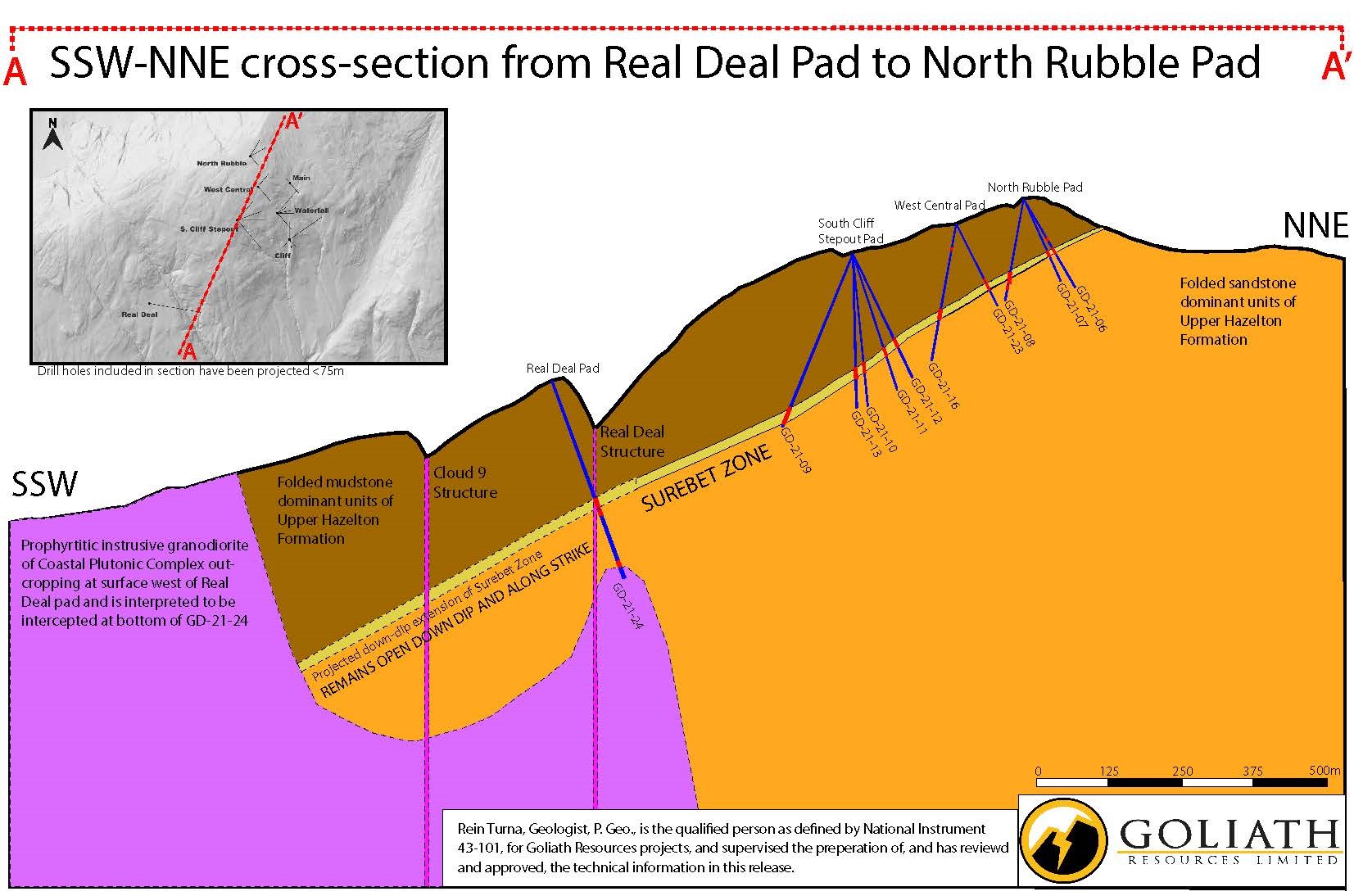 Figure 1: Cross-section of the Surebet zone. The objective of all 24 drill holes was to hit the mineralized "sandwich" down dip and along strike across its entire length and width. All 24 drill holes were successful. 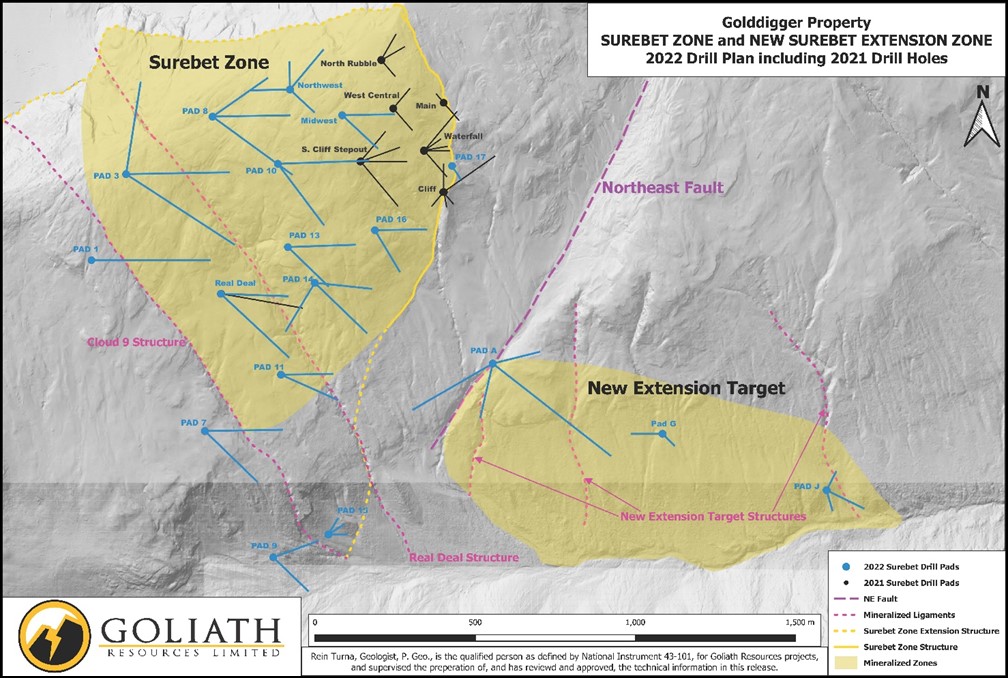 Roger Rosmus, founder and CEO of Goliath Resources, stated, "The results from the first 2021 drill program have exceeded our expectations as each hole intersected significant widths of polymetallic gold-silver mineralization. The extent and grades demonstrated by the drill holes indicate that the Surebet zone could develop into a world-class discovery. We look forward to expanding the Surebet discovery; drilling will focus on both infill and step-out drilling."

Advising Goliath and representing major shareholder Crescat Capital, Dr. Quinton Hennigh added, "The fact that all 24 core holes have successfully encountered mineralized intercepts at the Surebet Zone is remarkable, and even more remarkable is that these drill holes define a mineralized footprint of 1,000 m strike and 1,100 m down dip. Although another robust round of drilling is required to fully evaluate the Surebet Zone, this is a fantastic start and the first indication that this is a significant new discovery. At Crescat, we are pleased to be part of this exciting story and eagerly anticipate a new season of aggressive drilling at Surebet."

High-grade polymetallic gold-silver mineralization was confirmed in 2021 over an area of 1,200 meters by 400 meters to the southeast of Surebet. Exploration drilling is planned there for the first time in 2022. The newly discovered outcrop is located approximately 500 meters southeast of the Surebet Cliff Zone. Highlights of grab samples from this new deposit include samples grading 75.04 gpt AuEq, 57.97 gpt AuEq and 21.82 gpt AuEq; a channel intersection returned 14.76 gpt AuEq (13.5 gpt Au) over 0.58 metres. These samples are mineralogically, geochemically and texturally similar to surface and drill core samples from the Surebet discovery.

The Company has planned a drill program of ~18,000 meters of drilling in 2022. Three drill rigs have already been contracted for the 2022 program, with two drill rigs focused on infill and step-out drilling. The third rig will be used for step-out exploration drilling to test new areas west of Real Deal, including gold-silver occurrences along Cloud 9, 350 meters down-dip to the west and beyond. Cloud 9 and Real Deal are near vertical structures and are believed to be related to the Surebet zone at depth.

Surebet only a small part of the overall Golddigger project

Goliath Resources controls 100% of the Golddigger property. The project covers an area of 23,859 hectares (59,646 acres or 239 square kilometers). It is located in the world-class geological setting of the Eskay Graben within the Golden Triangle in British Columbia and is only 2 kilometers from the so-called Red Line, along which several world-class deposits exist. The property is located 30 kilometers southeast of Stewart, British Columbia. The Homestake Ridge deposit (Fury Gold Mines Limited), the Dolly Varden Silver Mine (Dolly Varden Silver Corp.) and the Kinskuch Project (Hecla Mining Company) are in close proximity.

Conclusion: The drill results now released place Surebet among the most significant new discoveries in the Golden Triangle over the past year. The natural advantage of the project from the outset was that the outline of the mineralized zone in the mountainous terrain was virtually visible in 3D from surface. The 24 drill holes were therefore able to accurately and directly test the suspected structure-bound sandwich. The question was whether the structure was continuous, thick and high-grade enough. Goliath has now answered all three points with a resounding "yes". With the additional 18,000 meters of drill holes, Surebet could finally grow into a real heavyweight in the Golden Triangle.

According to §34b WpHG and according to paragraph 48f paragraph 5 BörseG (Austria) we would like to point out that principals, partners, authors and employees of GOLDINVEST Consulting GmbH hold or may hold shares of Goliath Resources and therefore a possible conflict of interest exists. We also cannot exclude that other stock letters, media or research firms discuss the stocks we recommend during the same period. Therefore, symmetrical information and opinion generation may occur during this period. Furthermore, there is the prospect of a consulting or other service contract between Goliath Resources and GOLDINVEST Consulting GmbH, which means that a conflict of interest exists.