It's a liberating blow for Fidelity Minerals Corp. (TSX-V: FMN; FRA: S5GM) and for its shareholders, some of whom have waited for years: After tough negotiations with its private Peruvian co-owner, Fidelity Minerals is increasing its stake in the potential world-class Las Huaquillas gold-copper project in Peru by 5.5 percent, moving from minority shareholder to equal owner of the project company,

Rial Minera SAC, once earn-in conditions are met. These include completion of a new valid resource estimate and payment of US$500,000 in two installments. Previously, Fidelity had only been able to acquire a 44.5 percent interest in Rial Minera SAC, making aggressive exploration of the project unattractive from the company's perspective. Fidelity now plans to put up to $3 million into exploration. One indication of just how worthwhile this exploration could be is the historic LH97-08 well, drilled by Sulliden in 1997. That hole intersected 78 meters at 2.7 g/t Au from surface, suggesting the possibility of low-cost open pit mining at Las Huaquillas. This potential had been recognized early on by Sulliden in the 1990ies and later by Inca One. The latter had unsuccessfully sought an earn-in from the same owner in 2011. https://www.incaone.com/news/index.php?content_id=27

Commenting on the agreement, Fidelity Minerals CEO Dean Pekeski said, "The acquisition of this additional interest in the world-class mineralized Las Huaquillas project presents a significant opportunity for Fidelity that we intend to seize immediately. Our goal is to rapidly demonstrate the value of Las Huaquillas by conducting systematic exploration work. We believe the market will reward it if we delineate significant gold and copper resources. We are beginning the process of planning and permitting the drill program and restoring the underground workings on the property so that they can be made accessible for metallurgical sampling. I believe that successful exploration work will bring Fidelity's value in line with valuations of larger companies with projects at a similar stage."

Fidelity is committed to invest up to US$3,000,000 in underground sampling and exploration drilling to initiate a new NI 43-101 technical report with a new resource estimate. This report is expected to be completed within 18 months of receipt of drilling permitsl.

Rial Minera SAC, under the direction of Fidelity, will immediately begin planning for the upcoming exploration program. In addition, Fidelity intends to manage community relations, obtain environmental permits, arrange geological mapping and sampling including underground sampling and metallurgical testing. Geophysical surveys are also planned, as well as diamond drilling over a length of 5,000 to 7,500 m to eventually produce a NI 43-101 technical report. Once the NI 43-101 report is completed, the Company will have earned its 50% interest in the project and Rial's partners will then enter into a joint venture ("JV") to operate and fund Rial.

Once the JV is formed, the JV partners will arrange for further exploration programs. In the event of negotiations for the sale of all or a portion of the Project, the JV partners intend to establish a sale price consistent with standard project acquisition valuations and based on gold equivalent values achieved in the resource project market. Each JV partner will have a right of first refusal to sell an interest held by the other JV partner. In addition, the JV partners agree to a "Right of Co-sale (Tag Along)" clause which states that if the right of first refusal is not exercised, each partner will have the right to participate in the sale at the same price and on the same terms as the other partner. Each sale is subject to a 2.5% NSR, which accrues to the JV partners in proportion to their participation. No buy-down clause was included at this time. 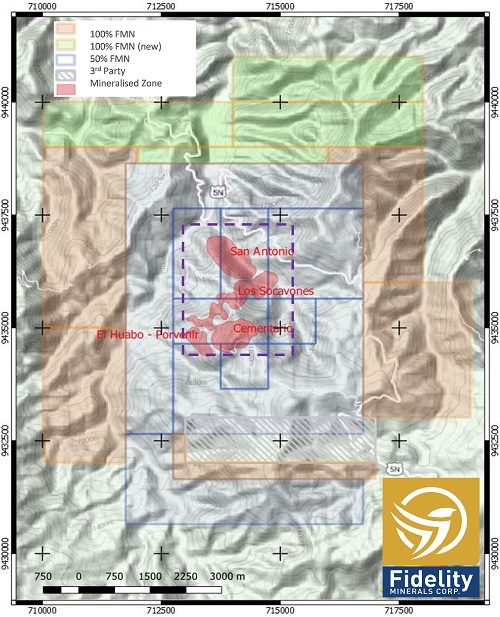 Figure 1: Significant mineralized zones. The concessions are located immediately south of the border with Ecuador, where recent exploration success and corporate activity in the Ecuadorian mining sector has highlighted the potential of a historically under-explored region.

There is extensive historical exploration data

The project has extensive historical exploration work dating back to 1999. This work included soil sampling, geophysical surveys and 5,742.9 metres of diamond drilling (26 holes) and the mining of approximately 1,200 metres of underground development on three levels in the Los Socavones Zone. This work defined five mineralized zones consisting of four mineralization types, including epithermal and porphyry style mineralization on the project.

While a valid NI43-101 compliant resource estimate does not yet exist for Las Huaquillas, there is extensive previous data. The most advanced zone of mineralization is the Los Socavones zone. It has been partially evaluated by Sulliden Exploration Inc (June 23, 1998 and Annual Report (1997-98)). Sulliden estimated that a 500-meter interval of the 2,200-meter Los Socavones structure hosts a historic near-surface geological resource of 6.57 Mt grading 2.12 g/t Au and 25.2 g/t Ag, equivalent to 446,000 ounces of gold and 5.3 million ounces of silver at a cut-off grade of 1 g/t Au. The historical resource, based on 10 drill holes and 20 mineralized intercepts, has been estimated to a depth of 200 metres and is reported as a historical resource estimate in a NI 43-101 technical report prepared in August 2011 for an unrelated party to Fidelity.

The Los Socavones Zone remains open down dip and along strike in both directions (northeast and southwest). The historical resource assessment encountered near surface mineralization in several drill holes. Hole LH97-08, drilled by Sulliden, intersected 78 metres at 2.7 g/t Au from surface, highlighting the potential for low-cost open pit mining. Significant base metal mineralization identified during historical exploration within the Los Socavones zone was not included in the historical resource estimate.

Positive assessment by Sulliden and later by Inca One.

Sulliden concluded that the overall geological setting suggests that the Las Huaquillas property compares well with other caldera-related porphyry copper-gold systems of the Circum Pacific Rim. Based on the data presented here, the Los Socovanes zone is interpreted to be an epithermal gold-silver telluric system overlain by a porphyry system. Wörltich states in the report, "This overburden is an important criterion in identifying world-class deposits (Sillitoe, 1994, 1995b)."

After a detailed review of the project, a subsequent operator (Strategic Review and Business Analysis, Inca One Resources Corp, March 9, 2012) released a report in March 2012 stating that "the Los Socavones zone alone may be capable of showing the potential for between 0.6 million and 4.0 million ounces of gold or gold-equivalent silver through future drilling, based on the historical resource estimate and assumed dip and strike extensions within the current concession boundary."

The Los Socavones anomaly is a large northeast to southwest trending mineralized fault zone that extends for at least 2.5 km and is approximately 100 m wide. The anomalous zone consists of two distinct Au-enriched pyrite-sphalerite-galena-quartz stockwork zones surrounded by a low-grade gold zone consisting of disseminated and narrow pyrite strands with minor sphalerite and chalcopyrite.

To date, 1,000 m of strike length has been drill tested and 400 m of underground workings, including 100 m of vertical development, have been completed. Drilling has intersected mineralization to a depth of approximately 200 m. The average true thickness of the mineralized zone is approximately 19 m with a maximum thickness of 65 m in the center of the zone.

The Cementerio Cu-Au porphyry system is located 1,000 m south of the Los Socavones zone. It includes extensive alteration that is partially visible along the road leading to the village of Las Huaquillas. A 600 m by 900 m circular multiphase diorite intrusion characterized by porphyritic textures is spatially related to the mineralization.

The San Antonio porphyry system is located 1,000 m NW of the Los Socavones zone. It coincides with a prominent copper-gold soil geochemical anomaly and is hosted within a 500 m x 900 m calcareous quartz-diorite intrusion. The host rock is massive, homogeneous and consists of 15% well-formed 2-mm plagioclase phenocrysts set in a finer groundmass of amphibole-feldspar-quartz-chlorite-biotite-magnetite-sericite.

Conclusion: Fidelity Minerals is making the access to Las Huaquillas cost quite a bit. In fact, the planned exploration expenditures of US$3 million represent almost half of today's market value of about CAD7.7 million. Fidelity has sufficient funds on hand to meet the initial 500,000 US-Dollars required and has in the money warrants that could bring in a further 750,000 CAD until December this year. Fidelity also expects to receive about 300,000 US-Dollars from the sale of its Cerro Dorado gold mill. But even then that will hardly be enough to fund exploration. It is very likely, in light of the Las Huaquillas acquisition, that Fidelity will bring new investors on board in the near future - presumably when more details of the planned exploration program are available. It will be exciting to see who these investors are and on what terms they come in.

That said the largest shareholder in Fidelity is Lions Bay Capital (LBI),an activist investment company that has financed the reconstruction of the company over the past two years. Additional funds will be required to finance the exploration program but it is in LBI’s interest that any fund raise it is at a premium to current levels.

The chief executive and majority shareholder of LBI is Mr John Byrne. He joined the board of Fidelity three months ago and is chairman of the board. He is very experienced in building mining companies and was instrumental in the formation and structuring of Mandalay Minerals which built and operates the rich Costerfield gold mine in Victoria. Mr Byrne was the founding chairman. According to Mr Byrne, the Las Huaqualles property represents one of the most attractive gold projects he has been involved with and has the potential to contain multi million ounces. It's thus important to keep an eye on Fidelity and the upcoming newsflow. There could be something big here.