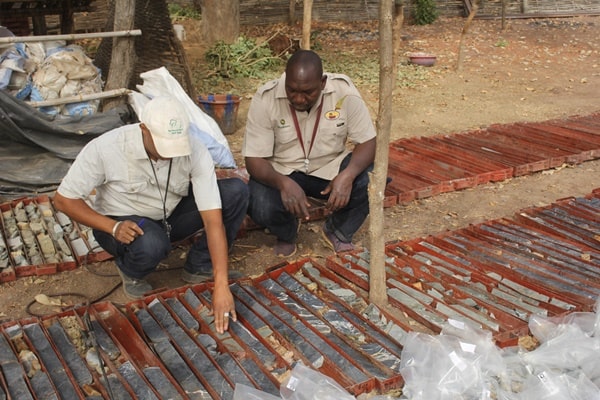 The recent drilling success at the newly discovered Gourbassi West North area could be a turning point for Desert Gold Ventures Inc. (TSX.V: DAU, FSE: QXR2, OTCQB: DAUGF) and a turning point in exploration at its SMSZ project in western Mali. Fast-tracked, Gourbassi West North is developing into one of the longest and widest mineralized zones on the entire 440-square-kilometer property. Drilling results show that the Gourbassi West North zone can be traced for approximately 1.6 kilometers and is open to the north and south. Soil anomalies indicate that the structure may continue northward for an additional six kilometers.

Essentially 72 aircore holes completed in late December 2021 and early January 2022 were sufficient for these new findings. Top results returned intercepts of 30 meters at 1.94 g/t gold, 12 meters at 2.75 g/t gold, and 37 meters at 1.10 g/t gold, with the company estimating that the measured lengths represent approximately 65 percent of true width. As recently as Jan. 17, Desert Gold had released its Maiden resource of 1.07 million ounces, which included five sub-projects including Gourbassi West.

Jared Scharf, President & CEO of Desert Gold, stated, "The Gourbassi West North zone now has an indicative strike length of 1.6 kilometers, making it one of the longest and widest mineralized zones on the property. Combined with the gold anomalies in soil extending a further six kilometers to the north, this highlights the potential of this previously overlooked portion of the property. Gourbassi West North is just one of several priority targets the Company will be developing at SMSZ this season, which we believe underscores the tremendous potential of this regional project." 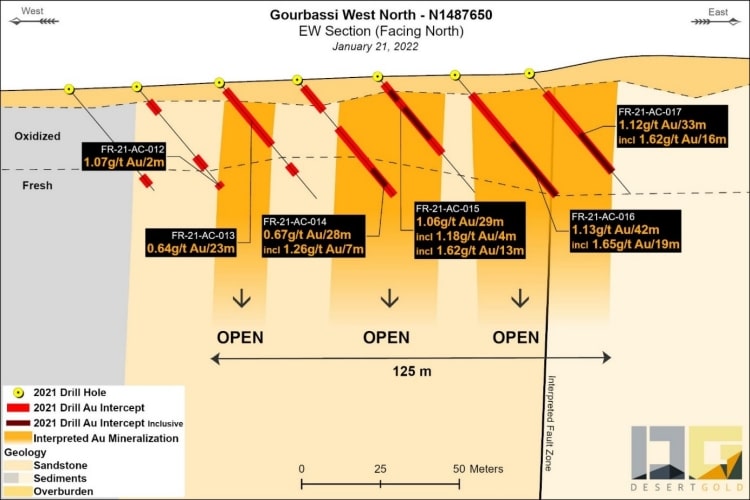 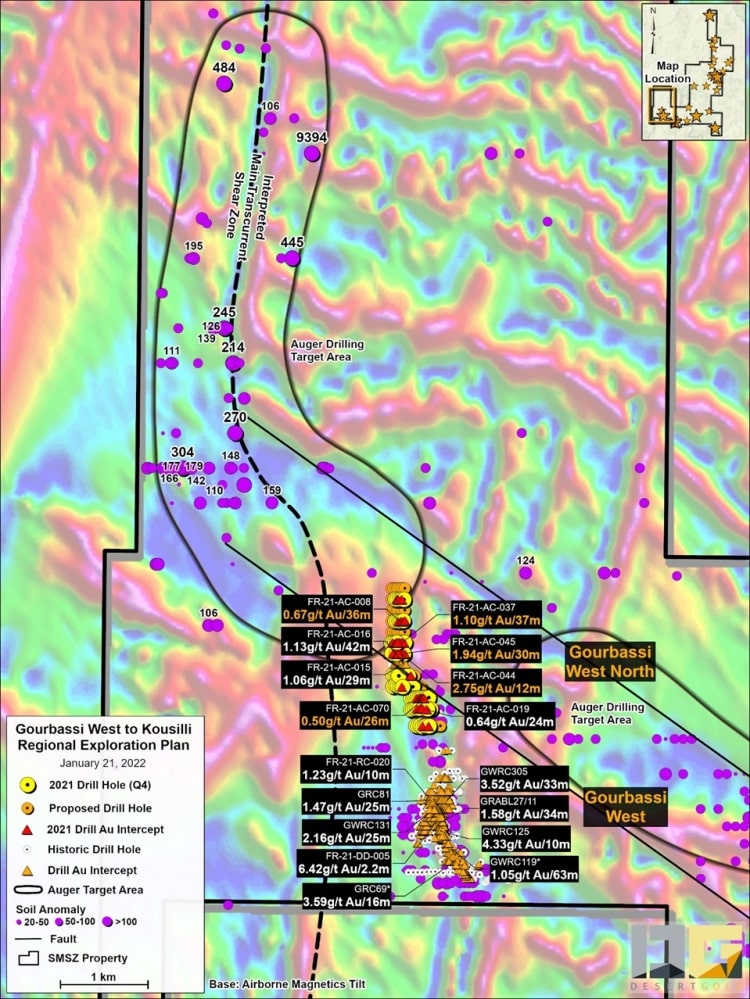 Figure 3: Does gold mineralization at Gourbassi West North continue northward, and if so, how? The map shows the four kilometer section where drilling has occurred. To the north, soil anomalies over a 6-kilometer length suggest that the gold corridor may continue.

Conclusion: Desert Gold could hardly have done better than the recent discovery of Gourbassi West North. With comparatively little effort and a minimal amount of investment capital, the company has revealed a new, clearly defined gold corridor of at least 1.6 kilometers in length. There is a likelihood that this structure could continue further north along the known major regional structure, the Main Transcurrent Zone. While this structure was known to cross the southwest of Deserts Gold's license, most exploration to date had tended to focus on the east side of the SMSZ project along the Senegal-Mali Shear Zone. There, in the southeast corner, lies the Mogoyafara project, among others, which hosts the largest single resource to date. In the best case Desert Gold has part in both regional large structures with the potential to host multiple million oz plus deposits all within a short distance from each other.

Disclaimer: GOLDINVEST Consulting GmbH offers editors, agencies and companies the possibility to publish comments, analyses and news on https://www.goldinvest.de. These contents serve exclusively the information of the readers and do not represent any kind of call to action, neither explicitly nor implicitly they are to be understood as an assurance of possible price developments. Furthermore, they in no way replace an individual expert investment advice, it is rather promotional / journalistic publications. Readers who make investment decisions or carry out transactions on the basis of the information provided here do so entirely at their own risk. The acquisition of securities, especially with shares in the penny stock area, carries high risks, which can lead to a total loss of the invested capital. The GOLDINVEST Consulting GmbH and its authors exclude any liability for financial losses or the content guarantee for topicality, correctness, adequacy and completeness of the articles offered here expressly. Please also note our terms of use.

According to §34b WpHG (Germany) and according to Paragraph 48f Paragraph 5 BörseG (Austria) we would like to point out that principals, partners, authors and employees of GOLDINVEST Consulting GmbH hold or may hold shares of Desert Gold Ventures and therefore a possible conflict of interest exists. We also cannot exclude that other stock letters, media or research firms discuss the stocks we recommend during the same period. Therefore, symmetrical information and opinion generation may occur during this period. Furthermore, there is the prospect of a consulting or other service contract between Desert Gold Ventures and GOLDINVEST Consulting GmbH, which means that a conflict of interest exists.