Desert Gold: Explorer among large producers in the middle of Mali's gold belt

The West African state of Mali does not have good press in this country. The first thing that comes to mind is therefore probably keywords such as "Islamist terrorists" or the question of the sense of the "foreign deployment of German troops". It is largely forgotten that Mali is the fourth largest gold producer in Africa and that the who's who of the mining industry is represented in the country. The well-known names range from Barrick to Endeavour to B2 Gold. They are all producing highly profitably in the low-cost jurisdiction of Mali at average all-in sustaining costs (AISC) of $600 to $800 and will likely continue to do so for years to come. In 2019, gold production in Mali was 2.3 million ounces. Known reserves are estimated at 26 million ounces.

Geographically, the vast majority of gold mines are located along the Senegal-Mali shear zone. This geological fault runs for about 250 kilometers along the border with Senegal - thousands of kilometers from conflict areas in northern Mali. The Senegal-Mali shear zone has been a hotbed of M&A activity over the last decade with several high-profile public transactions, most notably Barrick’s USD 6.5 billion acquisition of Randgold. Exactly there, in the immediate vicinity of the major producers, the Canadian gold explorer Desert Gold (TSXV: DAU; FRA: QXR2) has consolidated a remarkable portfolio of prospective gold properties in more than ten years of work and considerable investments totaling about CAD 35 million. As much as 43 kilometers of the 250-kilometer Senegal-Mali shear zone now belongs to Desert Gold. It is this flagship 440 km² consolidated property package, known as the SMSZ Project, whose true "property value" will be determined at some point by way of an M&A transaction. At least that's what Desert Gold is working towards, and that's what the company's prominent shareholders are speculating on, first and foremost mining legend Ross Beaty. In the upcoming Q4, the company is looking to release results from 18,000 meters of drilling, followed immediately by the very first resource estimate for a number of its key targets. While it's unlikely that the resource will be large enough right off the bat for the majors to pull out the checkbook, the results should leave a clear scent mark and draw attention to things to come. After all, Barrick's tier one +10 million oz Loulo/Gounkoto mine complex is just 30 kilometers south along trend of Desert Gold's properties. It was a company maker for Randgold at the time and a key asset of consideration in the Randgold acquisition.

Figure 1: A gold mine exists at virtually every sharp bend in Mali's western gold belt. The operators are B2 Gold, Barrick or Endeavour.

In the current year alone, Desert Gold has spent approximately US$3 million on exploration. Results from more than 18,000 meters of drilling are expected during Q4. Of particular note is that the company recently succeeded in acquiring the 30.6 square kilometer Kolomba concession area, which is strategically located adjacent to the company’s group of properties. The Hyundai automotive group spent millions on exploration here in the early 2000s before withdrawing from gold mining and exploration altogether in 2003. Desert Gold is now the beneficiary of this historic information and considerable capital investment.

Two gold zones in particular are at issue, open at depth and along strike. Historical drill intercepts in the Linguekoto West zone, for example, returned 16.03 grams per tonne gold over seven meters, 7.78 g/t gold over 19 meters and 3.51 g/t gold over 29 meters. The Mogoyafara South zone returned 2.04 g/t gold over 41 metres, 20.87 g/t gold over six meters and 1.40 g/t gold over 55 meters, among others. Both zones have the potential to add material additional mineral resources to Desert Gold in the near future. Modeling of these zones is underway with drill testing expected to commence in January of 2022 in parallel with geological mapping and IP (induced polarization) and magnetic geophysical surveys.

The Desert Gold management team has been operating in West Africa for more than 10 years. In Covid times, the on-site technical director, Don Dudek, takes on even greater importance. His expertise is widely recognized: He was VP Exploration of West African Miner Avion Gold until it was sold to Endeavor in 2012, and then as Senior Technical VP leading the Houndé feasibility study for Endeavour in 2012-14 and then as President & CEO Savary Gold until its sale to Semafo in 2019. 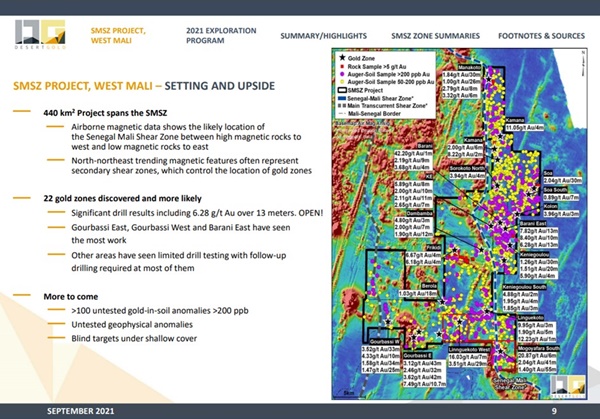 Figure 2: There are now an enormous number of data points in the license area. Of particular interest is the data inherited from Hyudai, which comes exclusively from near-surface RC drilling. At next year's follow-up, Desert Gold management sees great opportunities to extend and deepen the exsting gold zones with additional RC and diamond drilling. From today's perspective, past exploration was not very systematic.

Bottom line: the number of investors who have Desert Gold on their radar is likely to be manageable. The company thrives on a small number of loyal major shareholders. Many reading this are probably already put off by the country of Mali (we admit, that was a caveat for us initially as well). On the other hand, the time for a discovery of Desert Gold seems to be getting closer after ten years of preparation. By the end of the year, the company will release 18,000 meters of drill results and publish its first 43-101 compliant resource estimate. This initial resource estimate will set the stage for the Company’s 2022 work program. Desert Gold's big neighbors are likely to take it more seriously than in the past. If it should then also succeed in properly upgrading the just acquired former Hyundai property, a dynamic could be set in motion that will sooner or later force its neighbors to act. What is possible, provided the resource is right-sized, is illustrated by Endeavour Mining's recent acquisition of Teranga Gold Corporation, which was completed in February this year. Endeavour paid the equivalent of CAD2.44 billion for Terenga in Endeavour shares. Although the Gora Mine, which until recently belonged to Terenga, is located in Senegal, it is nevertheless only about 10 kilometers west of Desert Gold's properties in Mali and is related to the same geological features that occur on Desert’s property. Likewise, B2Golds 2015 $600 million share acquisition of West Mali explorer Papillon Resources is yet another example of the beta achievable for shareholders of these west African explorers. With a current market cap of roughly CAD $20 million, these examples illustrate the potential of Desert Gold should the Company prove successful in its ongoing exploration efforts. We will follow further news from Desert Gold closely.

Disclaimer: GOLDINVEST Consulting GmbH offers editors, agencies and companies the opportunity to publish comments, analyses and news on https://www.goldinvest.de. These contents serve exclusively the information of the readers and do not represent any kind of call to action, neither explicitly nor implicitly they are to be understood as an assurance of possible price developments. Furthermore, they in no way replace an individual expert investment advice, it is rather promotional / journalistic publications. Readers who make investment decisions or carry out transactions on the basis of the information provided here do so entirely at their own risk. The acquisition of securities, especially with shares in the penny stock area, carries high risks, which can lead to a total loss of the invested capital. The GOLDINVEST Consulting GmbH and its authors expressly exclude any liability for financial losses or the content guarantee for topicality, correctness, adequacy and completeness of the articles offered here. Please also note our terms of use.

According to §34b WpHG i.V.m. FinAnV (Germany) and according to section 48f paragraph 5 BörseG (Austria) we would like to point out that principals, partners, authors and employees of GOLDINVEST Consulting GmbH hold or may hold shares of Goliath Resources and therefore a possible conflict of interest exists. We also cannot exclude that other stock letters, media or research firms discuss the stocks we recommend during the same period. Therefore, symmetrical information and opinion generation may occur during this period. Furthermore, there is the prospect of a consulting or other service contract between Goliath Resources and GOLDINVEST Consulting GmbH, which means that a conflict of interest exists.

Early season start for Brixton Metals at... The summer season in far northern British Columbia is open, earlier than ever before. Brixton Metals Corporat... 94 views Tue, 24 May 2022, 15:08:02

Conico profits from the spectacular PGE ... Anyone who has doubted whether discoveries will still be rewarded by the market in view of weak stock mark... 314 views Mon, 16 May 2022, 12:49:37