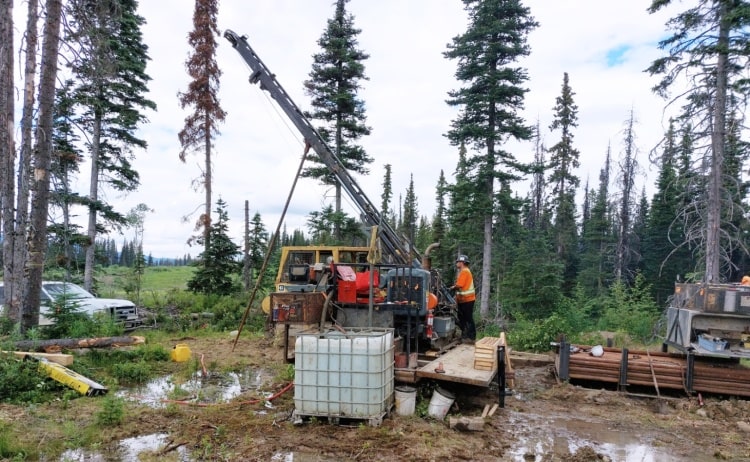 Nicholas Snowdon, metals expert at the investment bank Goldman Sachs, for example, recently spoke to Australian media of an impending supply shock triggered by the booming demand for electric vehicles and other green technologies, which is encountering chronic underinvestment in the development of new copper supplies and a lack of expertise in the construction of new copper mines. And the expert is far from alone in this opinion.

A huge copper deficit is looming

It's important to remember that 90% of current copper demand comes from economic sectors that have nothing to do with electric vehicles, charging infrastructure or the renewable energy sector. According to the Goldman Sachs expert, demand for the red metal from these sectors is currently "only" around 1.5 million tons, but is estimated to shoot up to to six to seven million tons by the end of the decade. And since, as many experts and market observers believe, the supply side will not be able to keep up, there is the threat of a huge deficit in the copper market. Goldman Sachs expert Snowdon said he believes it is likely that copper could rise to around USD 15,000 per tonne in such a case - the previous high from March this year was USD 10,730 per tonne! The analyst does not even consider prices of USD 50,000 or USD 100,000 per ton of copper to be out of the question....

The management of the junior company, which we present today, is also convinced of the superior future prospects of the red metal. At the beginning of the year, the management therefore realigned Alpha Copper (WKN A3DB6E / CNX ALCU) and put the focus on the promising Indata copper project!

The Indata project was already in the company's portfolio prior to the realignment and renaming of the company from Prophecy Potash to Alpha Copper and is particularly impressive due to its location. For Indata, the property covers an area of 3,189 hectares in central northern British Columbia and is located only a few kilometers from Northwest Copper's Kwanika Project, one of Canada's most exciting recent copper discoveries. The Central Zone of the Kwanika Project already has 57.7 million tonnes grading 0.48% copper and 0.55 g/t gold in the indicated category!

Originally staked by Imperial Metals in 1983, Indata has experienced a "wave" of exploration activity approximately every 3 to 5 years, according to Alpha Copper, which increased knowledge of the project's geology and helped define the areas of highest potential. Existing data from sampling, trenching, drilling, airborne and ground geophysics provide, the company says, a very solid base on which Alpha Copper intends to build its operations.

The Indata project is located in a complex geological setting adjacent to the Pinchi Fault, a major structure separating the Cache Creek and Quesnel Terranes. The Quesnel Terrane hosts the aforementioned promising Kwanika and Lorraine discoveries, all within only 15 kilometers of the Indata property. The adjacent Cache Creek terrane also hosts the equally promising Stardust property. 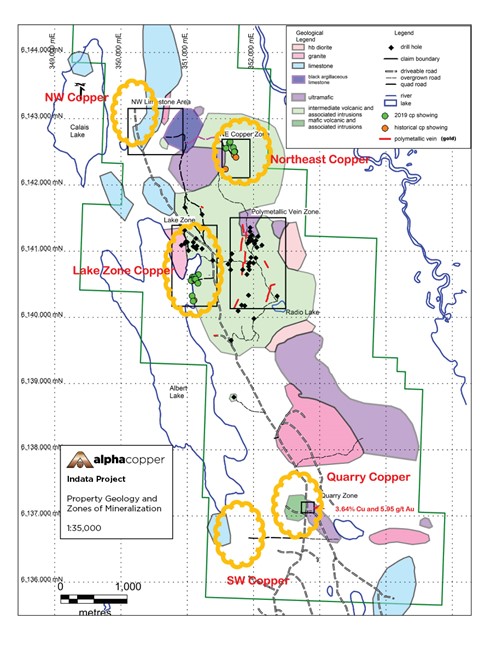 Alpha Copper is primarily targeting the known copper porphyry at Indata in what is known as the Lake Zone, which lies approximately 500 meters west of an area of polymetallic veins. A total of four copper mineralization zones have been discovered at Indata to date, with historical drill results including 148 meters of 0.2% copper, including 24.1 meters of 0.37% copper.

What are the next steps at Indata?

Alpha Copper has already sent a team to the project and has started drilling a total of 5,000 meters spread across all targets planned for this season. The focus will be on the Lake Zone, which is the most advanced and has the most extensive exploration data.

In addition, further soil sampling will be undertaken and the capabilities of an excavator will be utilized as it is moved across the project. In 2019, for example, the Quarry Zone target was discovered by the excavator during construction of the access road, with a sample returning 3.65% copper and 5.95 g/t gold - although this is only a single intercept. The Northwest and Southwest copper targets are more directly related to carbonate replacement mineralization targets very similar to the Kwanika and Stardust deposits just 1.9 km to the north on Northwest Copper's property. These two targets provide very interesting geophysical data that the Company is focused on developing into a complete data set during this campaign.

Alpha Copper can earn a 60% project interest in Indata from Eastfield Resources.

A Second iron in the fire

While the focus for Alpha Copper in the current exploration season is clearly on Indata, the company's second project called Okeover also appears very interesting. Okeover is located on the south coast of British Columbia, just 25 kilometers from the deep water port facilities of Powell River and only 145 kilometers northwest of Vancouver. Existing logging roads provide access to the property, allowing drill crews and equipment to be moved onto the project at low cost.

At Okeover, copper and molybdenum mineralization was first discovered in 1965 in the central portion of the property, following which seven companies, including Noranda and Falconbridge, conducted a full series of geological, geochemical and geophysical surveys between 1966 and 1977, including 13,831.5 metres of diamond core drilling in 82 holes.

The more recent history of Okeover then began in 2003 when Eastfield Resources Ltd. acquired an option and subsequently a 100% interest from a subsidiary of Northwest Copper. A total of 104 diamond core holes (18,202 meters) and 12 percussion holes (728 meters) were then completed between 1966 and 2008, and additional exploration activities were completed in 2004 and 2006. In addition, a marked grid consisting of 15 lines at approximately 100 meter intervals was established on a portion of the original survey base. A total of 499 soil samples were collected along the marked lines at 25 metre intervals and used for acid digestion and subsequent determination of 35 major and trace element determinations (including copper and molybdenum) by ICP emission spectrography techniques. Elevated copper and molybdenum values were detected throughout the grid area, with the highest values being 1,244 parts per million (ppm) copper and 534 ppm molybdenum.

The so-called North Lake zone also already has a historical resource of an inferred 86.8 million tonnes at 0.31% copper and 0.014% molybdenum sulfide from 2006, and Alpha plans to conduct a work program there in the fall. We are excited because, as outlined above, the Okeover project is far from being an early-stage conceptual project anymore, but an advanced project where exploration work has already been carried out on a large scale.

Conclusion: Alpha Copper raised about CAD 7.6 million in February 2022, only, at CAD 0.65 (flow through) and CAD 0.50 (non-flow through) and should thus have sufficient funds for at least this exploration and drilling season. Currently, the share price is below the level of this financing, which we believe is mainly due to the fact that short-term concerns about the development of the global economy - and thus copper demand - have depressed the price of the red metal. How the stock can perform theoretically when the copper price plays along can be seen in the share price performance since the rebranding of the company in February.

Back then, when copper finally formed a high of more than $10,000 per ton in early March, Alpha Copper was also trading at just under a Canadian dollar. Now, despite having made significant progress in the interim and with crews already drilling on Indata, Alpha Copper is trading at just $0.37 CAD, so, much cheaper. The news flow expected from Indata in the foreseeable future - ideally, of course, with successful drilling - could now give the stock more momentum again - especially if the copper price plays along. All in all, investors who also believe that the copper price will face a strong shortage and a rapid price increase in the coming years can, in our opinion, at least put Alpha Copper on their watch list. However, we would also like to explicitly point out that any opportunities with an early-stage explorer such as Alpha Copper are always accompanied by high risks. Investors should always be aware of this.

Risk note: GOLDINVEST Consulting GmbH offers editors, agencies and companies the opportunity to publish comments, analysis and news on https://www.goldinvest.de. These contents serve exclusively the information of the readers and do not represent any kind of call to action, neither explicitly nor implicitly they are to be understood as an assurance of possible price developments. Furthermore, they in no way replace an individual expert investment advice, it is rather promotional / journalistic publications. Readers who make investment decisions or carry out transactions on the basis of the information provided here do so entirely at their own risk. The acquisition of securities, especially with shares in the penny stock area, carries high risks, which can lead to a total loss of the invested capital. The GOLDINVEST Consulting GmbH and its authors expressly exclude any liability for financial losses or the content guarantee for topicality, correctness, adequacy and completeness of the articles offered here. Please also note our terms of use.

Pursuant to §34b WpHG (German Securities Trading Act) and in accordance with paragraph 48f (5) BörseG (Austrian Stock Exchange Act) we would like to point out that principals, partners, authors and employees of GOLDINVEST Consulting GmbH may hold shares in Alpha Copper and therefore a possible conflict of interest exists. Furthermore, we cannot exclude that other stock letters, media or research firms discuss the stocks we describe during the same period. Therefore, symmetrical information and opinion generation may occur during this period. Furthermore, there is a consulting or other service contract between Alpha Copper and GOLDINVEST Consulting GmbH, which means that there is a clear conflict of interest.