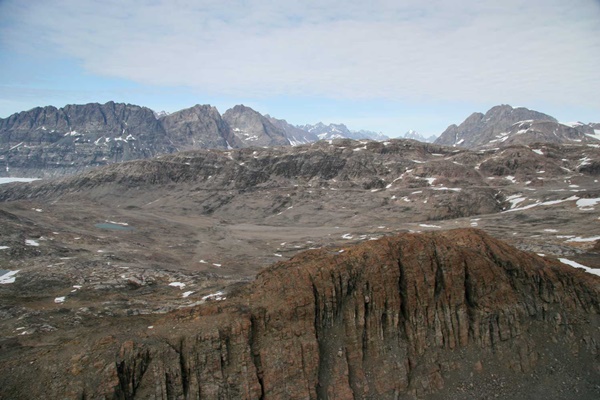 The Cu-Ni-Co-Pd-Au Ryberg project in East Greenland is increasingly revealing its huge potential and gigantic dimensions. Also on the second target at Ryberg, the Sortekap prospect, Conico Ltd. (ASX: CNJ; FRA: BDD) has hit the bull's eye with its first drill hole SODD001. The 236.7-meter drill hole targeted an IP anomaly measured in 2020. The drill hole confirmed the presence of sulfide mineralization at the target depth. Meanwhile, the second drill hole, SODD002, has commenced. It is again targeting the IP anomaly and is located 350 m south of SODD001.

The aeromagnetic radiometric survey of the 4,521 km2 Ryberg license area is 100% complete and has identified numerous areas of interest, some of which will be drill tested in the coming weeks. A new addition is the Pyramids area (Figure 2) some 13 kilometers southeast of Sortekap.

Thomas Abraham-James, CEO of Longland, classified the recent drilling success as follows: “The discovery at Sortekap is significant. We are seeing multiple styles of mineralization in a single drill hole. The IP survey combined with the surface geochemistry has successfully led us to a very prospective location which, as the recently completed regional magnetic survey shows, also has the most magnetic readings in the entire Ryberg project area. This opens up a very large area of interest that we will now investigate in earnest.”

Magnetite at Sortekap was a surprise

The IP anomaly at Sortekap will now be re-tested down-dip with at least two more drill holes. Drilling on SODD002 is already underway. Subsequent holes are in Archean greenstone amphibolite known to contain gold in quartz veins at surface. Previous surface sampling has returned grades up to 2.7 g/t, with gold associated with trace sulphides. Each hole will therefore penetrate two distinct zones: the amphibolite for gold and then the deeper IP anomaly.

The preliminary results at Sortekap are very encouraging and the presence of magnetite is something that was not detected in the IP survey. However, the recent helicopter magnetic survey has identified Sortekap and a site approximately 13 km to the southeast, referred to as Pyramiden, as the most magnetic sites within the entire Ryberg project area. The combined area of interest covers approximately 75 km2 and is considered highly prospective for additional sulphide and magnetite mineralization.

An initial reconnaissance of Pyramiden has taken place with iron oxide readily apparent. The geology is known to consist of Archean metamorphic rocks (such as at Sortekap in SODD001) overlain by approximately 100 million year old marine shales that have been intruded by mafic sills. Further exploration of this locality is planned with the intent of finding locations for drill holes this field season.

Figure 2: Mineralogical log for Sortekap drill hole SODD001. A total of approximately 160 meters of sulphide mineralization was encountered. A strong magnetite occurrence was also encountered from approximately drill meter 130 to drill meter 210. The magnetite encountered in SODD001 is massive, fine-grained and extends for a total length of 89.4 metres downhole. It differs from known deposits in Australia where iron occurs mainly in banded iron formations (BIF). Instead, the magnetite at Sortekap is the result of hydrothermal alteration of serpentinite and is more similar to the long-lived Cogne deposits in Italy, which produced magnetite from the Middle Ages until 1979. In addition to the magnetite, disseminated sulfide mineralization is also present, and analysis is pending to determine what metals other than iron may be present.

Figure 3: The map of the Miki prospect shows the locations of all previous and current drill holes as well as the EM-modeled panels (green). After initial small-scale drilling, Conico's team decided to drill step-out holes along the now well-defined intrusion. Step-out drill hole MIDD007 is located approximately 1.5 kilometers north of drill holes 1-6 and has encountered the expected mineralization. Drill hole MIDD008 is located a further 800 metres to the north-east (at the top of the image) and is currently being drilled. Further step-out drilling along the 50 kilometer structure is planned.

Conclusion: as we learn from the current news, Afghanistan and its presumed resource wealth appear to be lost to the West for now. Greenland could easily fill that void geologically and geostrategically. Recent investment activity by Silicon Valley fund Kobold Metals (https://www.koboldmetals.com/) on the west side of Greenland confirms that even the high tech scene is beginning to develop an awareness of dependence on critical raw materials. It is interesting to note that a major Norwegian investor, Equinor, has also recently joined Kobold Metals. No major investor is yet present on the east side of Greenland - not even Anglo American, which has secured large areas on the west side of Greenland. If Conico continues to deliver good results and pending assays confirm the suspected mineralization, it shouldn't be long before Conico gets in the crosshairs of major resource investors. We are already looking forward to that. This much is already certain: Geostrategically there is no way around the "raw material bank" Greenland in the future.