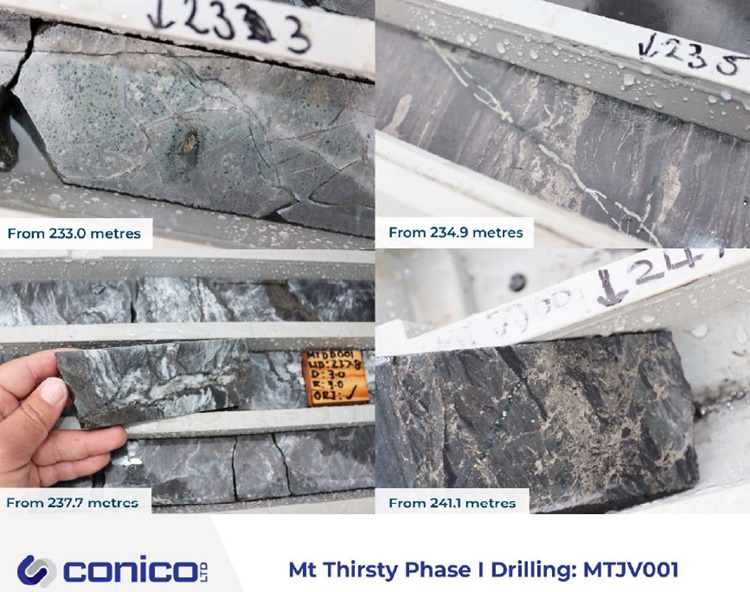 The Callisto discovery (palladium, platinum, gold, copper, nickel) had catapulted Galileo into the market spotlight in one swoop, sending the company's stock soaring from around A$0.22 to a peak of A$1.60. Conico has not yet reached that point, but the news published today has already caused the share price on the ASX to spike up by more than 24% with over 183 million shares traded!

This seems understandable, as the JV partners appear to have been successful with the very first drill hole, the first of 20 holes targeting mineralization associated with the same geological horizon as Callisto.

- 43 meters of disseminated sulfides in ultramafites from 190 meters downhole,

- 3 meters of disseminated sulfides in sediments from 233 meters downhole, and

In addition, both chalcopyrite and pentlandite were detected in the geological logging, confirming the presence of copper and nickel, which are commonly associated with PGE mineralization at Callisto. As if that were not enough, mineralization was detected at the contact between an ultramafic sill and a sedimentary unit, as is the case with the Callisto discovery.

Samples from hole MTJV001 have already been submitted to the laboratory where they will be assayed for palladium, platinum, gold, copper, nickel and rhodium, among others. Conico expects to have the assay results within four to six weeks. Of course, at the same time, the drills continue to turn. The next hole, MTRC014D, has been set further north, just 300 meters from Callisto. Overall, the company said, the promising mineralization horizon is open in all directions and has a further 2 kilometers of strike length in the Mount Thirsty joint venture area.

Executive Director Guy Le Page, stated, "The Company is delighted to have intersected a thick contiguous zone of strongly disseminated nickel-copper sulphides in the very first hole of this program. This hole is believed to have intersected the same geological horizon as the Callisto discovery, potentially extending the known strike horizon to over 400 meters while remaining open in all directions. Drill core assay results, including platinum, palladium and rhodium, are expected to be available in 4-6 weeks. The drill rig has now been moved further north, closer to Callisto, where the continuity of mineralization will be tested both along and across strike. We look forward to providing regular updates to shareholders as our understanding of the nature and extent of this recently identified mineralized system evolves over the coming weeks."

Conclusion: The first step is taken! Right with the first drill hole, it seems as if Galileo's Callisto discovery extends onto the Mount Thirsty joint venture of Conico and Greenstone. (Why should geological structures adhere to man-made boundaries...). The news was greeted with enthusiasm in Australia, sending the stock up more than 24% on huge trading volume. If the assay results turn out to be positive and further drilling provides Conico with similar findings as this first hole, we believe that this should be just the beginning of the journey. Certainly, Conico is still highly speculative, but the risks are offset by equivalent opportunities.