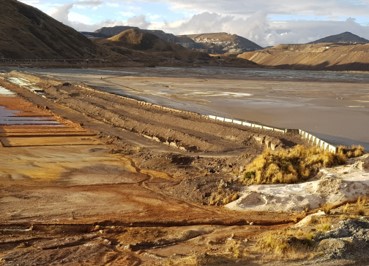 2021 did not go according to plan: the expected deal with neighbor Glencore did not materialize. Once again, Glencore lived up to its reputation as a difficult negotiating partner. Management therefore decided that it was better to make no deal than a bad deal. Behind the scenes, however, there has very much been progress and Cerro is working its way out of dependence on Glencore step by step. Most recently, Cerro acquired the neighboring Santander Mine from Trevali for the bargain price of just CAD one million in cash plus 10 million shares of treasury stock. The mine is profitable, but also requires capital expenditures. Shortly thereafter, Cerro de Pasco surprised the market by establishing the German green hydrogen company H2-SPHERE GmbH. H2-SPHERE is to develop the technology to use the pyrite deposited in the Cerro de Pasco Quiulacocha tailings pond to produce green hydrogen. H2 SPHERE intends to make significant use of German technologies. As a German company in the field of green hydrogen, H2 SPHERE could benefit from research funding in the future.

It is not surprising that some shareholders have lost the plot in view of the patchwork described above. However, one should not underestimate the full-blooded entrepreneur Guy Goulet. As CEO, he is pursuing a long-term plan. Perhaps he will soon be able to lay his cards completely on the table and deliver a coherent overall concept. We think Cerro de Pasco deserves more public support, especially from the environmental protection community. But what is not, can still become.