0 von 5 - 0 Bewertungen
Vielen Dank für die Bewertung dieses Beitrags. The music for gold explorers is clearly playing in Newfoundland at the moment. Some observers are even talking about a new "gold rush" in connection with New Found Gold's (TSXV: NFG) recent high-grade discoveries. Etruscus Resources Corp. (CSE: ETR; FRA: ERR) is taking advantage of this new interest in Newfoundland and claims a central place in the orchestra. The company has just announced it has secured an option to earn a 100% interest in the Lewis Gold Project in central Newfoundland.

The property consists of two claim blocks in the heart of the Peyton Linear gold trend, surrounded by successful neighbors: Exploits Discovery Corp. lies to the north and east, Sassy Resources Corporation to the west, and New Found Gold Corp. to the south. New Found Gold's famous Keats Zone with 92.86 g/t gold over 19 meters is just 10 kilometers away as the crow flies.

Together, the property covers 25.67 square kilometers (2,567 hectares) and gives Etruscus a key position in the exploration region of central Newfoundland. In keeping with the transaction, the entrepreneurial Jason Leikam assumes the role of President & CEO at Etruscus effective immediately. 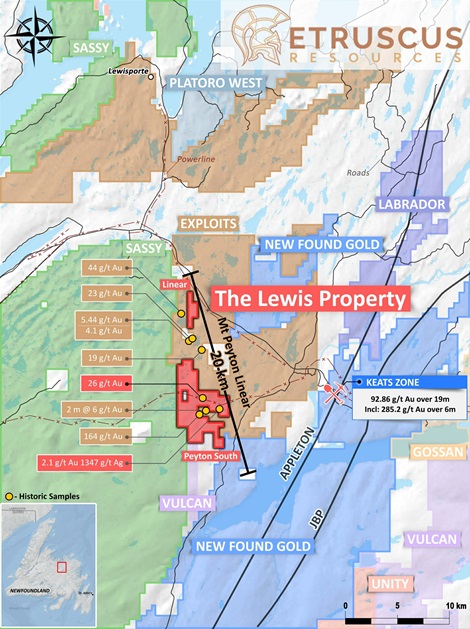 The exploration history of the Lewis Claims dates back to the 1980s with Successive programs completed by Noranda.  Later, Rubicon and Paragon Minerals were also active in the area. These successful historic exploration programs had already been conducted on the Lewis Project along known regional structures, but much of the property along highly prospective regional structures remains under explored.  The Etruscus team is currently compiling the existing exploration record, including geochemical, geophysics and drilling data, to determine the initial steps of an aggressive exploration program. With recently improved infrastructure and easy access, Etruscus believes it has the right property in the right place at the right time.

Concurrent with the acquisition, entrepreneur Jason Leikam comes on board at Etruscus as its new president and CEO. Leikam calls the transaction a turning point for the company. With the property acquisition in the Newfoundland Gold Belt, he says Etruscus now has two projects in two of Canada's most prospective and exciting exploration regions.  The company’s initial project, the Rock & Roll and Sugar properties, are located in British Columbia's Golden Triangle where an exploration program  is currently underway.

Leikam announced, "We are now commencing activities in Newfoundland and looking to expand our presence in this highly active region."

The Lewis property was acquired from multiple vendors, including New Rock Mining. New Rock’s CEO,Jeff Zajac, gives Etruscus a first-class report card: "We were very impressed with both the management and geological expertise that Etruscus brought to the project, two elements that we felt were critical in selecting a new partner. What ultimately won us over was their enthusiasm and vision to properly deploy resources to advance what we hope will be one of the next great gold success stories in Newfoundland." The other key member of the vendor consortium is Gary Lewis, who is a well-regarded Newfoundland-based prospector. Mr. Lewis has been instrumental in the identification of key targets within the Central Newfounland gold play and has advised multiple companies, including New Found Gold and Exploits Discoveries on the “big picture” opportunity in Newfoundland. The team vendors have held this land position in the heart of the Mt. Peyton Linear where key regional structures intersect. But, with this strategic acquisition, Etruscus is in position to advance this high impact property.

Each claim block is subject to a two percent (2%) net smelter returns royalty, subject to the purchase of one percent (1%) for CAD 2,000,000 at or before commercial production.

Geology of the Property

The property lies stratigraphically within the Dunnage tectonic zone and the Exploits subzone, which hosts numerous orogenic gold occurrences and deposits, such as those at New Found Gold's Queensway project. Gold mineralization in the area is mainly hosted in ENE and NNW striking orogenic shear zones, with much of the exploration focused on shear zones in sedimentary successions rather than intrusive shear zones.  The property underlies the Mt. Peyton Batholith, which is also intersected by these ENE and NNW structures, including the NNW-trending "Mt. Peyton Trend", and remains an underexplored area within the Exploits Sub-Zone.

Recorded historical work on the property began in the late 1980s by Noranda and later by Rubicon, Paragon Minerals, and Gary Lewis and related companies.  This work consisted of ground and IP surveys, some of which overlapped with the southern claims. Drill programs on and adjacent to the property have confirmed gold mineralization, with drill intercepts containing 8.83 g/t Au over 0.7 meters and 5.3 meters of 3.25 g/t Au.  Trenching also returned numerous boulders containing high-grade gold, including 25.8 g/t Au on the property and 164 g/t Au just outside the property, towards the ice. In addition to this exploration, portions of the property were sampled, particularly at the Corsair and Sabre occurrences. Historical grab sample results have been reported (although not confirmed by the Company) at up to 1,347 g/t Ag and 2.1 g/t Au.

Historical soil geochemical and IP surveys successfully identified several gold targets that have not yet been drill tested.

Etruscus is taking an immediate, targeted approach to exploration of the property and expects to quickly identify high priority drill targets. Limited exploration has been conducted on the Mt. Peyton pluton in the past and Etruscus is confident of discovering additional gold zones on the property through the application of systematic and modern exploration methods.

The Board of Directors announces the appointment of Jason Leikam as President and CEO. Mr. Leikam has served as an independent director of Etruscus Resources since its inception. He has over twenty years of experience in the junior capital markets, with a focus on business formation, marketing, and finance and administration. Outgoing CEO Gordon Lam will continue to support Etruscus as a director, shareholder and advisor. The Board of Directors thanks him for his remarkable dedication and diligence."

The Board of Directors also announces the appointment of Stephen Wetherup as Vice-President of Exploration. Mr. Wetherup is a structural and economic geologist with over 20 years of global exploration experience. He has worked for Fox Geological Consultants, Phelps Dodge Corporation of Canada and as a consulting geologist for numerous exploration companies including Freeport-McMoran. He currently also serves as Vice-President of Exploration for Commander Resources Ltd.

Etruscus Resources Corp. owns the 27,880-hectare Rock & Roll and Sugar exploration properties near the past-producing Snip mine in the prolific Golden Triangle area of northwestern B.C. With the acquisition of the Lewis properties, Etruscus is now active in Newfoundland. Etruscus has 36,886,622 common shares issued and outstanding.

Bottom line: just a few days ago, Etruscus completed an oversubscribed placement of $2.6 million CAD - at $0.30 CAD and a post-money valuation of just $10 million CAD. The fresh money must be enough this season to explore Etruscus' two projects, Rock & Roll in British Columbia and Lewis in Newfoundland. The valuation is very small compared with most other players in the heart of the Newfoundland gold play. With a well-cared for share structure and activity on two projects this summer and autumn, we expect good news flow with exploration results, and maybe more strategic acquisitions.

The acquisition in the heart of Newfoundland's gold rush should bring the Etruscus name to many new investors for the first time. The high-grade discoveries in Newfoundland have raised enormous expectations and, in some cases, driven the valuations of Etruscus' (new) neighbors to dizzying heights. If Etruscus succeeds in proving the geological connection to its neighbors with corresponding results, then Etruscus' stock has a huge catch-up potential to come even close to the valuation of its peers. It is interesting to note that - despite the current hype surrounding Newfoundland - the transaction is being handled on comparatively moderate terms. The sellers might have been able to get more from other bidders in the short term, but they chose the Etruscus team. This vote of confidence clearly speaks for the team and probably also for the new CEO of Etruscus. We are happy to actively accompany the company from now on. 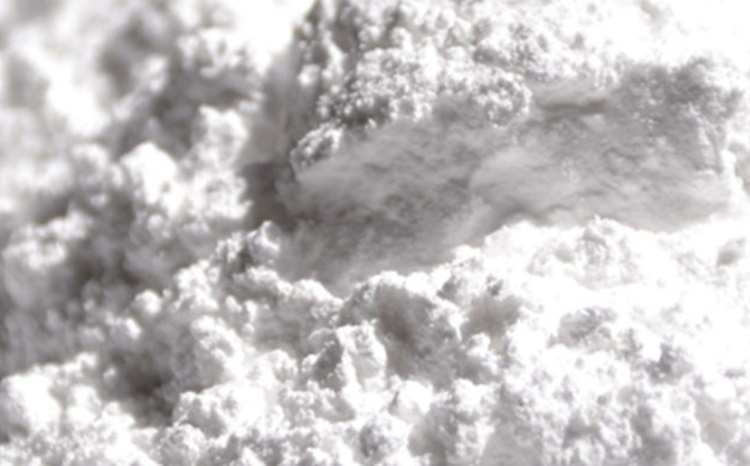 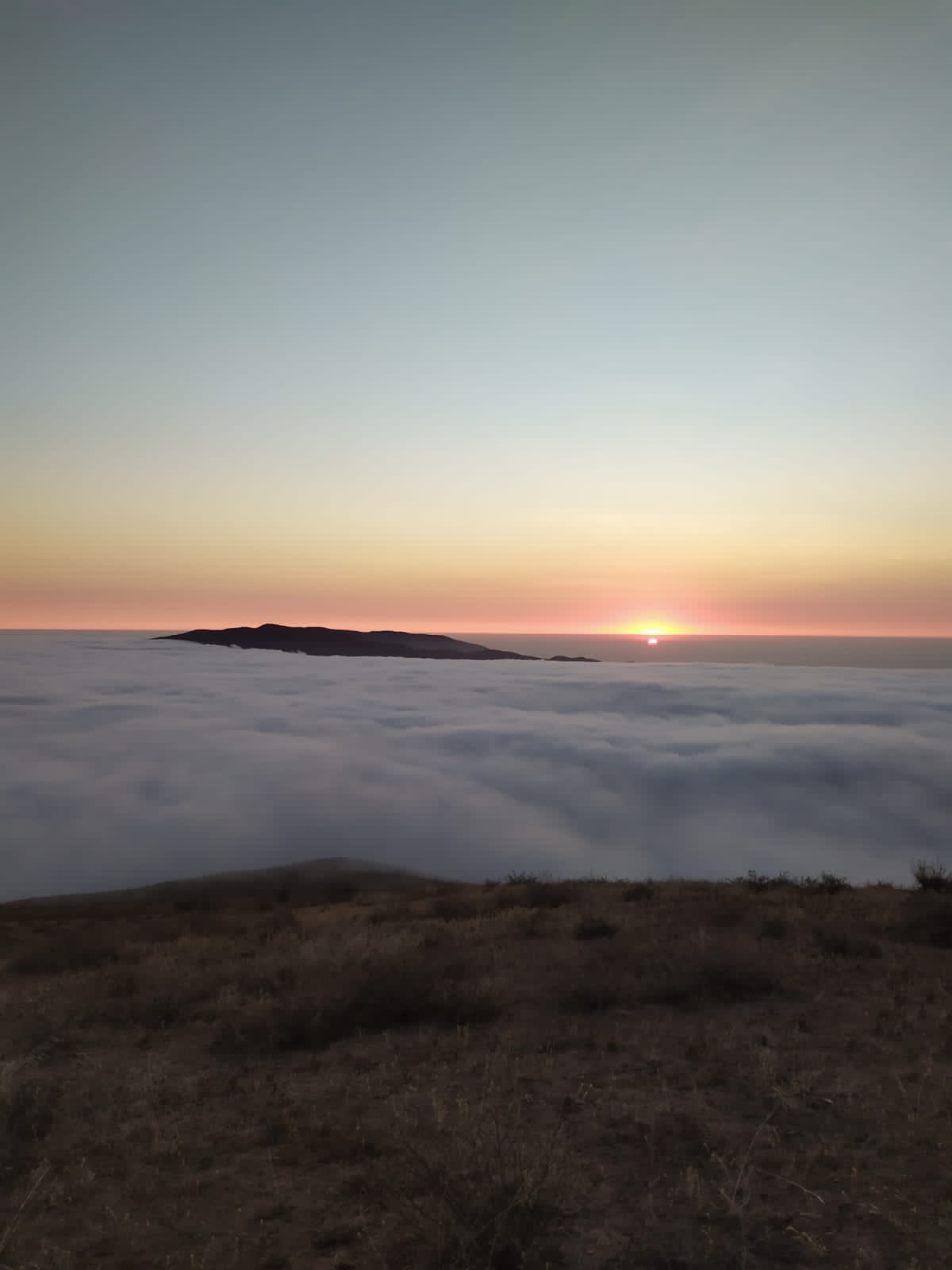