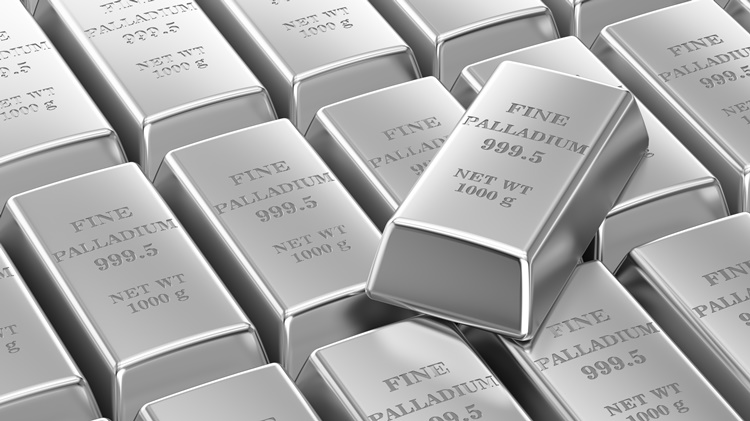 A double-digit price appreciation is a healthy return in any year, but palladium’s gains are even more impressive against the backdrop of struggles that every major asset class faced in 2018. By comparison, spot gold, platinum and silver all declined last year (1.6%, 14.5%, and 8.5%, respectively). U.S. equities, now in a bear market, lost 4.4% in 2018 as measured by the S&P 500 Total Return Index.1 According to The Wall Street Journal, the only other asset class to best palladium in 2018 was the commodity cocoa which gained 27.7%. Equities across the board were down, with the exception of the S&P 500 Health Care sub-sector (up 4.7%).2 At the time of this writing, palladium prices had overtaken gold for the first time since 2002 ($1,344 versus $1,295 as of January 9, 2019). Palladium’s price appreciation is best understood by analyzing the very unique supply-demand dynamics behind the metal.

Palladium mining is exceptionally concentrated with Russia and South Africa accounting for 79% of the estimated 2018 production. Typically, palladium is a by-product of mines that are built to extract other key industrial metals like platinum and rhodium, since palladium tends to co-occur in these ore deposits. Although palladium prices have doubled since the end of 2015, this increase has not been material enough to entice meaningful production increases from existing mines or investment in new mines, given the complex and relatively inelastic extraction economics of palladium mining. Looking ahead, we believe that palladium mine supply will remain fixed, with no large palladium mines coming online in the near term. Autocatalytic converter use accounts for 75% of the net demand for palladium. This trend appears to be on the rise and is being driven by several factors. Air-quality standards for automotive exhausts are on the rise around the world as countries such as China and India grapple with smog. This has necessitated increased use of palladium in catalytic converters. The drop in diesel automobile sales due to the now infamous “Dieselgate” has led in higher sales of hybrid and gasoline powered automobiles. Well into the 1990s, platinum was used to catalyze the conversion of noxious automotive emissions in both gasoline- and diesel-powered cars. Palladium was substituted with platinum as a way of lowering the build cost of a catalytic converter in gasoline and hybrid automobiles. The relationship between cost to buy a given amount of a commodity like palladium for immediate delivery (the spot price) and the price to buy it for delivery in the future (a future contract) can provide important insights into the commodity’s supply and demand dynamics. Because of the cost involved in securing, insuring and storing the metal, the futures price of a commodity is normally higher than the spot price — a situation called “contango.”

The inverse of contango is “backwardation,” which occurs when the futures price of a commodity is lower than the future expected spot price. As you would expect, given the costs of having the metal safely stored until delivery, backwardation is uncommon in metals markets with normal levels of supply. Yet, palladium futures have been in backwardation all year, indicating a very tight physical market for palladium. The long duration of backwardation in palladium futures is unsurprising given that palladium has been in a persistent deficit since 2010, with 2015 being the most recent exception. The tightness of the palladium market is most apparent when looking at palladium ETFs, where market makers have continued to redeem their units to take delivery of the physical metal in order to meet the persistently high level of demand while the price of palladium has continued to rise. Figure 5 highlights units outstanding of the Aberdeen Standard Physical Palladium Shares ETF (PALL) versus its price. The Automotive Industry and the Future of Palladium

If automakers originally moved to palladium as a cheaper substitute for platinum, why haven’t automakers switched back to platinum, given that platinum is trading at close to US$500 an ounce to palladium? Regardless of this uncertainty, we believe that the situation will become more critical for automakers as palladium deficits now begin to attract speculators. Our industry sources are of the opinion that most Original Equipment Manufacturers (OEMs) would need at least 18 to 24 months to engineer platinum into the autocatalytic converter (ACC) to replace palladium. Barring a widespread global economic slowdown, it appears inevitable that OEMs will once again shift back to platinum. The question is when.

As a result, the long-term investment case for palladium becomes more uncertain beyond 24 months. However, over the next 18-24 months, we believe it is likely that palladium prices will remain robust as automakers scramble for the physical metal. Confirming this, investor speculation in the palladium market has modestly increased as a result of recent tightness. Our view is that palladium’s fundamentals should remain strong for at least the next 24 months.

SAM LP is the investment manager to the Sprott Physical Bullion Trusts (the “Trusts”). Important information about the Trusts, including the investment objectives and strategies, purchase options, applicable management fees, and expenses, is contained in the prospectus. Please read the document carefully before investing. Investment funds are not guaranteed, their values change frequently and past performance may not be repeated. This communication does not constitute an offer to sell or solicitation to purchase securities of the Trusts.

The risks associated with investing in a Trust depend on the securities and assets in which the Trust invests, based upon the Trust’s particular objectives. There is no assurance that any Trust will achieve its investment objective, and its net asset value, yield and investment return will fluctuate from time to time with market conditions. There is no guarantee that the full amount of your original investment in a Trust will be returned to you. The Trusts are not insured by the Canada Deposit Insurance Corporation or any other government deposit insurer. Please read a Trust’s prospectus before investing.

The information provided is general in nature and is provided with the understanding that it may not be relied upon as, nor considered to be, the rendering or tax, legal, accounting or professional advice. Readers should consult with their own accountants and/or lawyers for advice on the specific circumstances before taking any action.