Cantex is pleased to report the first results from its 2022 drill program at the North Rackla project.  To date results from seven holes have been received with three of these holes having significant results as presented in Table 1.

Cantex has completed 36 holes on the North Rackla project so far during the 2022 season.  Results from 29 of these holes are still awaited and will be reported when received.

The drill team has just gone on a two week break as mandated by the Yukon Workers' Safety and Compensation Board and will be back drilling on August 20 th .

The drill holes reported in this press release were drilled using HQ (63.5mm) diamond drill bits.  The core was logged, marked up for sampling and then divided into equal halves using a diamond saw on site.  One half of the core was left in the original core box.  The other half was sampled and placed into sealed bags which were in turn placed into larger bags closed with security seals prior to being transported to CF Mineral Research Ltd. in Kelowna, BC .

At CF Minerals the drill core was dried prior to crushing to -10 mesh.  The samples, which averaged over 3kg, were then mixed prior to splitting off 800g.  The 800g splits were pulverized to -200 mesh and a 250g split was sent for assay.  Quality control procedures included running a barren sand sample through both the crusher and pulveriser between each sample to ensure no inter-sample contamination occurred.  Silica blanks were inserted along with certified reference samples.  These quality control samples were each inserted approximately every 20 samples.

ALS Chemex in Vancouver assayed the samples using a four-acid digestion with an ICP-MS finish.  The 48 element ME-MS61 technique was used to provide a geochemical signature of the mineralization.  Where lead or zinc  values exceeded one percent the Pb-OG62 or Zn-OG62 techniques were used.  These have upper limits of 20% lead and 30% zinc respectively.  Samples with lead and zinc values over these limits were then analyzed by titration methods Pb-VOL70 and Zn-VOL50.  Where silver samples exceeded 100 g/t the Ag-OG62 technique was used which has an upper limit of 1,500 g/t.   The over limit analyses contributed to delays in receiving final assay results.

The technical information and results reported here have been reviewed by Mr. Chad Ulansky P.Geol ., a Qualified Person under National Instrument 43-101, who is responsible for the technical content of this release. 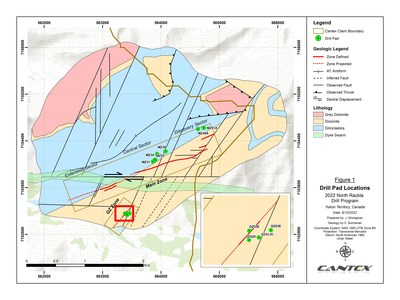 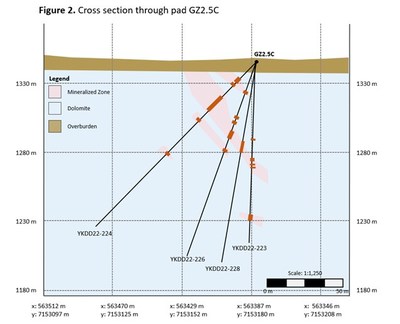